Staying true to my vow to bring you more horror movie coverage, I bring you our first official film review. Fret not, as we’ll be diving deeper and deeper into the genre, looking to cast light on all things gruesome. As I’ve noted in the past, horror novels will always be our top priority, but the truth is, we’re head-cases when it comes to the genre. Most of us behind the HNR machine are obsessed with the macabre, and it’s time to stop pulling punches. It’s time to cover the stuff we want to cover, the stuff that deserves to be covered… even if it isn’t a novel.

I’m always game for a fun monster movie. The truth is, we don’t see all too many pop up these days, but when a gem lands on our doorstep, it’s best to spread the word. And, despite a myriad of plot holes and inconsistencies, Under the Bed certainly deserves mention. It’s a fun flick with a nasty monster on display, an unorthodox examination of the age old fear of what might rest beneath your comfy bed, and – believe it or not – there’s a dash of coming of age narrative thrown in for good measure.

Neal’s been off living with relatives for two years. Why? Because he set his house on fire, resulting in the death of his mother. Why the hell would the kid set his own house on fire you ask? To kill that abomination that’s been dwelling under his bed, of course! When Neal returns home however, he discovers that his younger brother, Paulie has been experiencing some similar situations. Whatever it was tormenting Neal has now taken to targeting Paulie, and as is the case with most flicks of this nature, the resident parents are completely closed-minded to the horrors dwelling in their own home. Therefore, it’s up to these two brothers to find a way to exterminate the evil that seems to have no desire to separate itself from their lives. 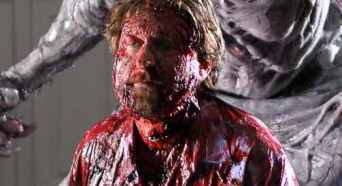 I like this flick, I really do. The story is packed with lazy maneuvers and countless copout scenes, but I’ll be damned if it isn’t an engaging piece of work all the same. The greatest detriment viewers can prepare to face is the disconnectedness of Terry, the boys’ father. This guy is a moron with a capital M, and just totally and completely refuses to entertain the idea that maybe something sinister is happening in his home. In fact, he travels beyond that point of idiocy and flirts with outright torture as he berates his kids, locks them in the room in which they’ve fallen victim to the monster’s attack, and even takes the one thing that seems to keep them safe away: the lights. This guy’s one of the biggest tools you’ll spot in a genre flick, and oddly enough it kind of works because – get this – the new step-mother is the one who actually seems to care about the kids. Director Steven C. Miller completely flips the script on audiences. It’s always the step-parent that sucks and the biological parent who uses sense to navigate the awful plight. But not this time. Dad redefines ignorant and stepmom battles to bring some sense of normalcy to the family’s life.

Do I need to tell you what kind of fate awaits Bad Daddy? I doubt it.

Anyhow, Terry isn’t actually the only anchor that fights to sink the movie. There are numerous scenes that just make no sense. How in the world can a parent not hear loads of furniture crashing about, or detect the obnoxiously thick plumes of fog that creep from their children’s bedroom? Furthermore, how can the audience expect to follow (closely, I should say) a story when that story is never even really explained? At one point during the picture both Neal and Paulie are sucked into another dark world where this creature exists…. but, what is this world? Where is this world? Why have we suddenly entered this strange realm if we see absolutely no conflict there? These kids get yanked into a hellish land for all of 60 seconds before Neal gets Paulie out thanks to a magical rope (that’s been severed) that somehow connects these two worlds. Pointless scene? You bet. And there are a couple of those pointless scenes that leave the viewer feeling as if they’ve been duped. Okay, you develop something super random and potentially cool, just to backtrack and never attempt to explain such a decision? Weird. Weird indeed.

But those, again, are the faults of the flick. The story as a whole just isn’t fantastic, makes little sense, and worst of all, is never clearly explained. Hell, it’s never explained in the least bit. But, for some really strange reason, all of that is overlookable. I can totally and completely get past enough pitfalls to bury Indiana Jones, and I’m not even entirely sure why. Perhaps it’s the awesome connection shared by these two boys. Perhaps it’s gruesomeness of the focal monster. It could be the wildly gratifying gore-spree that unravels in the picture’s final frame. The nod to Evil Dead in the form of chainsaw wielding, perhaps? Maybe it’s a little bit of all of those things.

Under the Bed is about a million reels away from perfect, but somehow it sucks you in and totally holds you there. It isn’t difficult to find yourself engrained in the troubles these two youngsters face, and it’s even less difficult to really cheer for the two (despite a pretty anticlimactic finale). There are some terrific visuals, and a couple genuinely eerie shots that are prone to catch audiences off-guard. Don’t seek this one out hoping for a modern masterpiece, as you won’t get it. What you will get however, is a thrilling, often creepy monster movie with some strong performances, at times stellar atmosphere and a hideous creation that has no qualms with tearing a cranium to pieces.