It astonishes me that no one watching the dailies during the production of Jaws: The Revenge caught on that they were making one of the worst sequels in cinematic history and set fire to the footage before it could be released theatrically.

I’d have figured their first clue would’ve come when it came time for them to watch the underwater shark sequences they’d filmed. Based on what I processed through my visual cortex during this movie, I’d say the way they got the obviously papier-mache’ / canvas shark model to move was to have a diver float next to it off screen and push it so it would glide past the camera. Seriously, the mechanical shark in Jaws:The Revenge demonstrates about as much movement while it’s swimming as a Lincoln Log.

As far as the plot goes, the fourth film in the once-profitable franchise tries to sell audiences the absurd premise that yet another Great White shark has swum into the Brody clan’s life, this time seeking revenge on the family. It starts by attacking youngest son Sean on Christmas Eve while he’s on police duty in Amityville. Here’s the first clue something is not right: Sean Brody is a policeman doing patrols at night on the water in Amityville- just like his dad-  despite the third film having established that he had moved to the Midwest and feared the water like a gremlin fears sunlight. This complete reversal of the character is presented without even the slightest hint of explanation. Apparently, part III never happened. 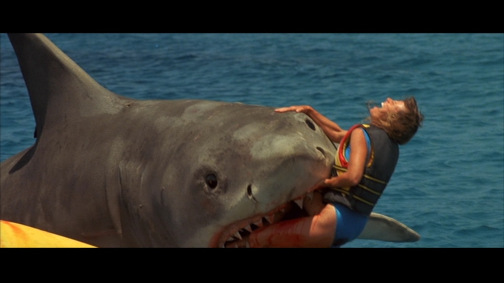 After the film has effectively given continuity the finger during the opening stanza,  the spiteful monster fish then follows grief-stricken matriarch Ellen Brody (Lorraine Gary) to the Bahamas , where she visits older son Mike (Lance Guest) , who is studying conch with Mario Van Peebles. Again, not what this character was doing in the previous film and not who he was doing it with.

As long as I’m pointing out how the  writers of this movie pissed in the continuity pool, I have to bring special attention to what has to be be the most pointless aspect of this film: Mike’s marriage. Yes, Mike Brody is married this time, but not to the strong willed and likable character played by Bess Armstrong in Jaws III. No, this film has him pretending (I’m guessing ) to be happily married to an an unlikable artist (Karen Young) who is so lacking in character that you tend to forget she exists until she shows up in another few scenes, sucking more energy from the rest of the cast like some sort of thespian vampire. Even now, the fact of her being on film in this movie is the only real proof I have that she wasn’t a horrible, horrible figment of my apparently aberrant imagination, conjured after having one Sex on the Beach too many while watching Shark Week. The character of Mike’s wife exists for one reason in this film: To provide the basis for why Ellen has a granddaughter, who will inevitably be imperiled. Ironically, we’re never given much of a chance to care about the kid. Her biggest scene is one where she acts out and pisses off the already perpetually irritable wife, at which point I already started hoping the shark would eat the annoying little creep, making it difficult to generate much empathy for her potential demise.

Michael Caine shows up as a love interest of sorts for Ellen and it says something that I somehow still thought he was too young for her. His character’s name is Hoagie and he’s a pilot . Allusions are made to his skirting the edges of the law,  but nothing much happens with that. Aside from being a jolly good bloke oozing with all the Michael Caine-ness that makes Michael Caine, well, Michael Caine, Hoagie’s only real contribution to this film is to effectively distract from the continual suck that is the shark with a physics-defying moment where he swims thirty yards from a sinking plane to a yacht and doesn’t even get a drop of water on his outfit. 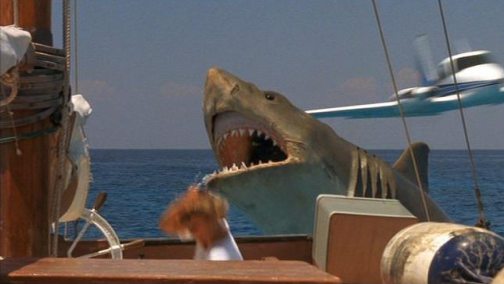 As if all of this weren’t bad enough , the filmmakers decided to throw in a completely ludicrous finale to round this stinker off. This includes the funniest moment in the history of killer shark movies, when the Great White – apparently having made an incredible evolutionary leap forward and developed vocal chords with which to let fly bellows of Ichthyological rage – leaps from the water and hovers just long enough to be rammed by the bow of a boat. What makes this scene so funny is that, right at this moment, the film cuts to what is either the original footage of the remains of the exploded shark sinking beneath the waves that ended the original Jaws or a direct beat-for-beat copy of it. Either way, believe me when I tell you that this was not the best time to specifically evoke memories of the good movie.

In summation: For the third sequel in a beloved and successful franchise, the filmmakers decided what audiences really wanted in 1987 was a script filled with half assed notions about a Great White stalking the Brody family across the Atlantic that establishes a 70 year old woman as the shark killing action hero/protagonist. Then they tossed in Michael Caine and the kid from The Last Starfighter as part of an apparent attempt to kill whatever career either one might have left (Caine recovered, but the ploy seems to have worked for Lance Guest), didn’t try to make the shark convincing in the least and didn’t even bother to devise a new shark death scene. Because fuck the fans, that’s why.

Rating: 1/5 (For a surprisingly well-staged shark attack on a  flotation ride full of children and a fairly startling jump scare involving an eel, both of which are the only redeeming scenes in this entire film.)