A Quick Note: What?! This isn’t a novel, it’s a movie! Yes, you are indeed correct. The Purge is a film, and we’ll be discussing more horror films around these parts. Make no mistake, novels will remain our primary focus, but you’ll certainly see more celluloid coverage in the mix in the future. Now, onto some Purgediscussion!

Ever watch a film that actually infuriates you? A picture that feels as though it was created with the sole purpose of delivering a figurative fuck you to the audience? They’re the worst kind of pics imaginable. They burrow in the psyche, an itch that simply cannot be scratched. On onehand pictures of this nature are successful, as they linger, seemingly impossible to omit from the memory bank. On the other hand, viewers know that a production of that nature lingers for all the wrong reasons. Think House of the Dead; a miserable movie that manifests nausea, but simply refuses to check out of the mental hotel. You just cannot wipe a flick of that nature from your mind, sadly it’s ingrained.

The Purge is that movie.

Writer/director, James DeMonaco delivers a story with profound potential. The Purge breaks countless cliché genre rules, and functions on a powerful crux. The idea that the country could isolate one 12-hour stretch of evening every 365 days as a violence fueled “release” is petrifying. Imagine for a single moment that one night of each year all crime is completely legal and totally unregulated by law enforcement. Hate your asshole neighbor? Wait for The Purge to arrive and execute that SOB in cold blood: it’s legal! That’s a mind numbing thought, it’s also a rather innovative – albeit grisly – notion. By all accounts, The Purge could have been a genuine game changer.

The potential wasn’t lost on lovers of the macabre. Shot on a modest budget of $3 million the feature would go on to earn more than $87 million worldwide, while debuting in the number one box office slot upon its June debut. By all accounts, The Purge was a commercial success on the big screen, and there’s fair reason to believe (quite a few critics embraced the flick with open arms and warm hearts) it’s going to do well on home video. There’s intrigue to this picture, and that – along with Ethan Hawke, who fronts the film – has managed to draw curious eyes across the globe.

The problem is, The Purge isn’t a particularly good film. As noted, it has all the makings to be a monumental film, but the oft disconnected and unrealistic (and realism is especially important with a film like this, as the scenario is plausible given the direction the government has been heading) script rip a hole right through the sails. If you thought the idea of The Purge was somewhat flabbergasting, the decisions made by the focal players will leave your mandible unhinged.

For the sake of all things thorough and clear cut we’ll go over the storyline. Hawke portrays James Sandin,successful businessman, loving husband (to wife Mary, played by the terrific Lena Headey) and father to two children (Charlie and Zoey, as played by Max Burkholder and Adelaide Kane, respectively). The Purge is minutes away from launch, and James begins the process of locking his home down (this guy’s got a damn nice setup that could keep an unprepared army out). The chaos begins to unfold outside of the Sandin’s safe haven, but it quickly arrives at the door of James’ lavish home. Charlie, the naïve son spots a man in distress while watching their surveillance cameras, and opts to allow the man inside. James isn’t pleased, in the slightest, and things get worse for the Sandin’s as the stranger’s pursuers soon find themselves outside this sprawling structure, demanding the release of the man. And, that’s where things get really, really frenzied. The stranger is loose, hiding in the house. James cannot find him, and the failure to relinquish the man leads to a storm of the gaudy abode.

Honestly, we’re still in the clear here. The picture still sounds stimulating. It still holds a certain allure that calls to the dark side in all of us. However, it’s what crawls within the corridors of the crux that sends the production into an uncontrollable downward spiral. Terrible decision after terrible decision soon turn the viewer (at least this viewer) off, and with good reason: these choices are unbelievable. Charlie’s decision to grant the stranger entrance into his home doesn’t sit well with the analytical mind. A boy of 11-13 would likely be paralyzed with fear on the eve of The Purge. His life is on the line, and he’s old enough to know the imminent dangers of such a savage event. Mary’s decision to refrain from sending the stranger back out into the night just doesn’t jive either. This is a mother we’re talking about. A mother with two children to care for, and she makes the decision to harbor this man and place her children’s lives at risks rather than answering the maternal call. As a father, I can say without hesitation that I’d murder, and die for my daughter without a second thought. My wife would echo those sentiments. It’s a dog eat dog world, and this futuristic existence is far more gruesome than that which we live in today. There’s just no way a parent puts his children directly in harm’s way for a complete unknown. 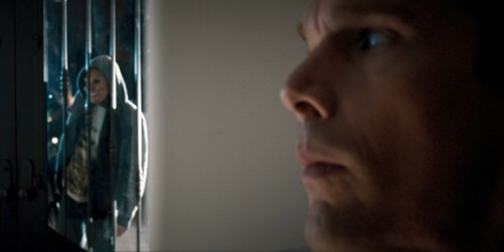 And don’t think for a second that the moral struggle of the storyline has been lost on me. The entire angle, the right versus wrong message, the exploration of human barbarity is on clear display. It simply cannot be missed. However, moral feuds don’t hold much weight in a situation as dire as this. This isn’t a post-apocalyptic setting showcasing the decision to exile a group member. This is breakneck violence, right now. Your family is at risk. They can be murdered in cold blood while the perpetrator walks away from that incident without so much as a slap on the hand. That is intense, instinctive stuff. The Purge is a story that’s simply too extreme to warrant major moral battles of this ilk. It’s life or death, in the moment, with limited seconds to contemplate. Your family comes first, your conscience can wait.

This picture disregards logic (yes, we all know, the whole idea is rather outlandish, but again, there’s a hint of potential reality in this film). Furthermore, it insults the viewer by eliminating the only character in the ensemble who seems to truly understand the severity of things and the potential ramifications that come with poor decisions. For the benefit of those who haven’t caught the pic just yet, spoilers will be omitted, and I won’t reveal who this specific player is, though you’ll want to heed these words: you might be surprised.

There are a number of other minor hiccups in the film (speaking of which, what the hell is up with Zoey’s boy toy?!), though they’re not as pronounced, and therefore don’t merit mention. The point that needs to be hammered home really focuses on the characters themselves and the character examination that unravels over the course of 85 minutes. Because that’s what damages the film in irreparable fashion. DeMonaco had a riveting concept to work with here, but he allowed the intimacy and legitimacy to melt away rapidly. There are enough layers in the tale to have taken this one in a similar yet simultaneously different direction with tremendous success, but that’s not what awaits viewers. What awaits viewers is a horror picture that could have possibly been one of the finest to ever see release, but ultimately shoots itself in the foot by dismissing any tangible reasoning.