This film thrives on realism and is a hidden gem in the low budget horror world, with a slow pace to begin with that soon rockets into a catapult due to some very chilling and angering characters.

Matt, who is a D.O.P (Director.Of.Photography) hoping to ‘make it’ in Hollywood, is travelling to the place where dreams come true with his friend and someone who happens to be a first A.D (Assistant.Director).

So Matt and fellow creative Riley embark on a journey in hopes of achieving fame and fortune.

But this all goes horribly wrong upon after having an old friend, Chaps, a band member, tag along for the ride.

But this leech is the least of their problems as the tale unravels.

The first aspect that struck my eye was the beautiful shots from the movie’s own D.O.P showing a rustic, homey America.

In comparison to the clichéd New York, LA that are the usual suspects on the big screen, so the camera exploring the ‘real’ USA was a nice change.

The collision of the characters is what holds this whole flick together.

We have Matt (Matt Mercer), the genuine, all around nice guy.

Then we have the friend Riley, (Kalan Ray) the oddball, which a feisty temper when provoked.

Now your initial instinct for this obnoxious pig is to hate and detest him, but, as the story unfolds, and confrontations are encountered, he begins to change.

He transforms into a calmer, more sensitive person, who instils sympathy in the viewers when he has some almighty verbal thrashings from Matt and Riley.

Proving his well cloaked gentler side prevails against the macho façade.

Music is another component that is unusual, some drastic mixes, with atmospheric background soundtracks added in.

Usually the music would have been too much for my liking, but shockingly, it heightens the horror at selected moments.

Just when you get to the point of the film where you begin to question where it is headed, the action begins.

You have clashing in the group of men, and the adventure itself, but you are wandering where is the terror, the abhorrence? When do things start to happen?

This is fortunately answered, and pleasantly surprises the viewers.

The expedition becomes chilling, with the insertion of a hitch hiker, which Matt and Riley are smart enough to drive past, but Chaps, lacking common sense, and flattered that the road straggler has heard of, and seen his band play, brings him along for the ride.

I hear you sigh, but don’t fret! 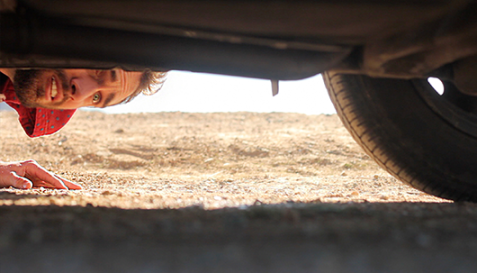 This is not just an overdone and monotonous remake of ‘The Hitcher- 1986’ or a hitch-hiker style movie where innocent victims are trapped in a game of cat and mouse against a mentally deranged psychopath.

In this case, new ground is broken.

Yes, we have an antagonist, but they do not inflict the harm themselves, they leave it up to science.

When we have a scene of a drug store pharmacist being killed and medication stolen, we are confused and befuddled, this is, until the ending explains everything.

A special mention has to go out to this freeway terrorizer (Patrick Gorman) for his eerie acting, and ability to intimidate through the screen. His portrayal of this disturbed individual challenges the master of road horror himself Rutger Hauer.

The only critique I have for this movie, is that the main happenings seems delayed, the strained relationships between the men dominates the entire excursion, whereas it should have been the uninvited, more sinister guest that monopolizes the plot.

The climax was impressive and well executed, but I fear the majority of watchers will tire of this flick early on, not wanting to see a testosterone battle, but craving more apprehensions and panic producing minutes.

However, this being said, it was an enjoyable commute, but I would only recommend this to dedicated fans of the genre, who have a weakness for low budget features, and have patience.

But rest assured, you will think twice about your next road trip across the country.