It took a bit longer to get around to I, Frankenstein than I’d expected, but I made it – eventually. Was it worth the wait? Well… I’m not entirely certain of how to answer that question. There are some strong qualities to the production, but there are some serious head scratchers at work as well.

The story obviously focuses in on Frankenstein’s monster, eventually named Adam by a gargoyle queen (no, I’m not making that up). Adam’s been wandering the world for a few hundred years, along his travels he’s inadvertently stumbled upon a group of powerful demons. Demons who’ve long waged a war invisible to the human eye; they’re arch rivals of the aforementioned gargoyles. What’s the end design for these demons? To get their hands on Adam, or Dr. Frankenstein’s medical journal, and learn the secret to reanimating a corpse. Because a reanimated corpse has no soul, demons are free to possess the bodies. Ultimately, uber bad guy Naberius intends on creating an army of demons to not only put an end to the gargoyles, but to the human race as well.

Wait a minute… this guy is a demon… if he wanted to live in Hell, couldn’t he just, you know, go back there?

Not everything adds up in this film, and I’m certain someone in the crew would openly admit that this movie has little to do with story and everything to do with big visual effects (but some of the visuals are confusing as shit, like the strange period piece look of the film during every shot featuring Adam, but the modern aesthetics that surface every time Bill Nighy is onscreen. This is perceptibly designed to be a contemporary tale, though director Stuart Beattie can’t seem to decide if he wants to go with a modern look or a vintage look; the fusion of both is not, in my opinion, successful). It’s quite obvious the crew behind the Underworld series is behind this one – it not only looks and feels like Underworld, it also features Bill Nighy playing an awfully similar role to that which he played in the Underworld flicks, and another Underworld familiar, Kevin Grevioux is attached, once more playing a significant sidekick to a major opposing force. Put the pieces together, note the warring ancient clans and it’s impossible to ignore the likenesses between pictures. In fact, they are at times almost identical.

What’s that say for the movie and potential viewers? Well, I suppose it says watch this movie, if you liked the Underworld flicks! Personally I enjoyed the battle between lycans and vampires, and I was entertained by the war between demons and gargoyles. I’m not yet prepared to call I, Frankenstein an awesome movie, but it’s good for brainless entertainment and a solid dose of action. And, to be honest, Aaron Eckhart makes for a quality action hero, even if he does look ridiculously gaunt in this particular piece. 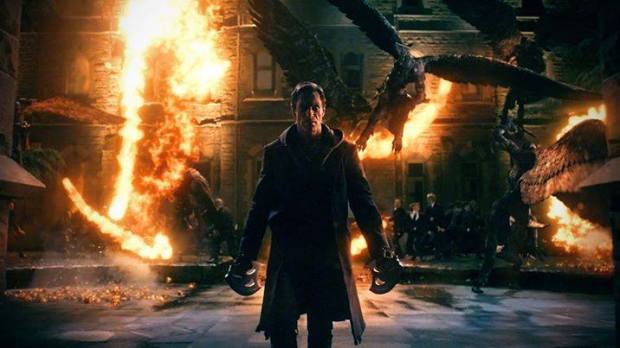 Don’t tune into this new Frankenstein yarn with hopes of something monumental, or game changing. You’re not going to find that here. What you will find are a few impressive action sequences, an epic image or so and a bunch of different creatures that vary from insanely bad ass looking, to laughably bad CGI manifestations. Yep, fits right in with the Underworld mold.