There’s something magical about a picture that can rely on 90-percent suggestion and 10-percent execution. Pics like that, with that deep, Hitchockian degree of mystery and intrigue are few and far between. But when they come along, when they bubble to the surface unexpectedly, it’s an absolute joy. Catching Jeremy Lovering’s astoundingly atmospheric, constantly creepy slow burn chiller, In Fear was exactly what I needed. I’ve had some solid cinematic luck lately, running into more than a single stud flick over the last month. In Fear keeps the trend alive and well.

The story follows a new couple on their first road-trip, where things go terribly wrong after a hasty decision to make a last minute detour deposits the couple in the middle of a terrifying maze. They’re trapped in perennial pursuit of a mysterious motel, but rather than quarters, they run smack into a lunatic who knows the land, has an unbelievably sick sense of humor, gets off on killing innocent individuals and even sports some suicidal tendencies of his own. The question quickly becomes quite obvious: Can Tom and Lucy survive the night, or will maniacal aggression prevail in a gloomy climax? 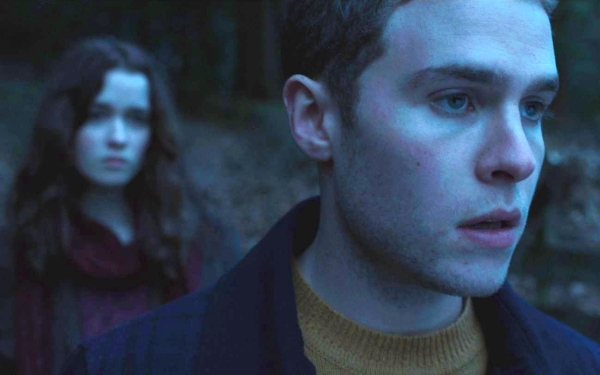 I love the obvious examination of character personalities, and I love the organic nature that both Iain De Caestecker (Tom) and Alice Englert (Lucy) bring to the film. They both feel so every day, so typical… so real. It’s impressive, the idea of two actual people (not Hollywood plastic stand-ins) facing such peril. And they don’t oversell their trials, which is brilliant. Their responses to the dangers thrust before them are realistic to the core, which takes what could have been a very monotonous story and makes it highly enthralling. You can expect to be completely engaged in the picture, because whether or not Tom and Lucy survive means something. A rare accomplishment these days.

Technically this a fantastic film that feels a bit like an early Ben Wheatley effort. Caestecker and Englert earn their stripes and then some, and director Jeremy Lovering scores big with his first official feature length film (he’s had a hand in plenty of television work). This one could remain a sleeper, given the fact that it hasn’t earned much of a push stateside. But it deserves major recognition. It’s an excellent example of kick ass indie filmmaking.