In the early 1970’s, director William Freidkin and author William Peter Blatty successfully combined forces to adapt to the screen Blatty’s tremendously successful novel of terror and possession, The Exorcist. The film became a worldwide phenomenon, changing the face of how make up effects were executed on film, setting a new standard for quality in horror -themed storytelling and has gone on to generally be regarded as the gold standard for horror  by most genre fans. So naturally, plans for a sequel were immediately green-lit.

A few years later, in 1977, director John Boorman (who would go on to deliver the superb Excalibur, the best cinematic take on the Arthur legend to date)brought us Exorcist II: The Heretic. Filmed sans the involvement of either Blatty or Friedkin, this film teamed a returning Linda Blair with Richard Burton in a plot that had them…..

…..you know what? To this day, I have no idea what in the hell this movie was actually about. As far as I can tell, Nurse Rached (Louise Fletcher) from One Flew Over the Cuckoo’s Nest runs a psychiatric clinic for children where Regan McNeil (Blair) works, occasionally utilizing a hypnosis machine that functions like some sort of skating-rink-disco-ball nightmare to try to probe into whatever repressed memories Regan has of the time when she was possessed by Pazuzu. Burton portrays a priest who gets involved and somehow Africa and locusts factor in. I did not embellish that synopsis in any way.

Look, let’s cut through the crap. This is a terrible film. The pacing is lethargic, the acting stilted and the plot mundane. Only in a flashback sequence involving Father Merrin (Max Van Sydow, returning to give the film the all of five minutes of actual on-screen energy it demonstrates before going comatose again) performing an earlier exorcism does even a hint of the atmosphere exuded by the original resurface.

In all other regards, this a muddled waste of time and effort, with a conclusion that is ridiculously overwrought and completely unfathomable in its stupidity as it brings Regan back to the house on M street and attempts to equal the suspense and horror of the original film’s climax by recreating it. This only serves to remind audiences of the original film, which in turn heightens the sense that what we’re  watching is actually a second rate copy. 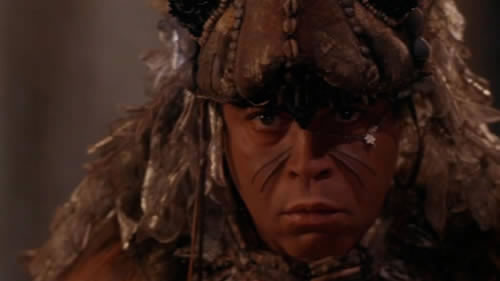 There are people over the years who have attempted to defend this misbegotten piece of shit. All I can say to those individuals is “raise your standards.” Indeed there does exist a vast array of underrated films which have aged well and warrant a critical re-evaluation, but Exorcist II: The Heretic isn’t one of them. It’s every bit as awful today as it was in 1977.

Horror fans who  want to see a truly frightening, inventive and thought provoking sequel will be better served by checking out the grotesquely overlooked third chapter in this series , Exorcist III : Legion which was written and directed by William Peter Blatty, author of the sequel novel “Legion” that the film is based on. It’s far and away superior to II and, based on the connective narrative tissue, is the legitimate sequel to the original.

The Bottom Line: Exorcist II:The Heretic is exactly that: Heresy towards the name of the motion picture many fans still regard as the greatest horror film ever to roll before a camera. You know you’re in trouble when James Earl Jones appearing as an African witch doctor who transforms into a tiger can’t lift a picture out of the mire.

Rating: 0/5 – My worst rating. Don’t even bother. Watch the original again and then skip straight to Legion..you’ll save the price of a rental and actually end up with a better sense of continuity.

2 Comments on ‘Exorcist II: The Heretic’ Was One Steaming Pile of Shit (Review)