Over the last few decades I’ve been impressed by very few musicals. Well, very few horror musicals, in particular. The Rocky Horror Picture Show, The Little Shop of Horrors, REPO! The Genetic Opera and The Devil’s Carnival rank among the strongest on the market. Each of the aforementioned films do two things right: they leave enough room in the production for an actual story (REPO! feels a tad murky at times, I’ll admit) to be told without the aid of forceful song sequences, and they place enough emphasis on the actual song writing to make a number of tunes memorable. It’s about the balance of things, and if you miss the mark in either category, your film certainly stands to suffer some noticeable flaws. But there are other intangibles of film – again, horror musicals specifically – that can alter the mood of a feature in extremely positive, or extremely negative ways. Atmosphere is crucial (something The Little Shop of Horrors succeeds in creating seamlessly, despite it’s somewhat basic execution), as are the pure aesthetics (where pics like The Devil’s Carnival flourish) of the film. But that’s not to say that every piece has to be profoundly grandiose or moving, it’s just to say that all of the pieces have to fit together. An overtly comedic piece has to play faithful to its tone, just as an extremely grim piece does. No matter the vibe, the film has to feel cohesive and fully dedicated in its mission.

Stage Fright is a piece that leans in the direction of comedy, but never once shies away from graphic violence and detailed gore. It also does something that I think many directors who choose to shoot horror musicals fear: it showcases, with pride, every trope associated with this malnourished subgenre as well as the ultra-cliché slasher subgenre. But the glee showcased while toying with the familiar is quite detectable, and writer/director Jerome Sable is more than overjoyed to slip in the occasional camera wink. It isn’t missed, and it isn’t uninvited in any way. In fact, it’s fucking brilliant. Sable is a savvy, savvy filmmaker with an ear to the ground, a strong knowledge of pop culture and a promising career to boot. He constantly pokes fun at elitist or overused ideology and it works in summoning more than a single guffaw – not a mere chuckle, mind you, but true outbursts of laughter.

But there’s another big element of the pic that resonates: it is in-your-face violent and bloody as all hell. There is no compassion spent for the faint of heart, and Jerome lets us know that inside of five minutes, when one of the feature’s marquee names is slain in grisly, graphic detail. If Sable’s intention was to hook the viewer and let them know something unique wait just around the bend, holy shit did he ever succeed. Blades, power tools, light bulbs – you name it, if it’s potentially hazardous, it’s a weapon used to commit merciless murder in this gloriously gory (there’s a certain leg scene I’d love to speak on, but you’ve got to see it rather than read about it) flick.

And even beyond the mood of the film, or the loyalty to horror fans who know their movies inside and out, or the buckets of blood, there’re a few damn cool twists in this tale of murderous slasher revenge. And that’s really all it is, a slasher with some catchy and raunchy tunes; Sable kept things formulaic, but refined his every move along the way, and actually manages to deliver one final twist that does indeed surprise. I won’t pretend that the masked murderer offing kids at a performing arts camp is original in any way (okay, maybe the whole performing arts camp thing deserves some respect), but I will say this, he’s got enough red herrings flying about the production to keep the intrigue level high, and the mechanics of storytelling moving very, very fluidly, from start to finish. 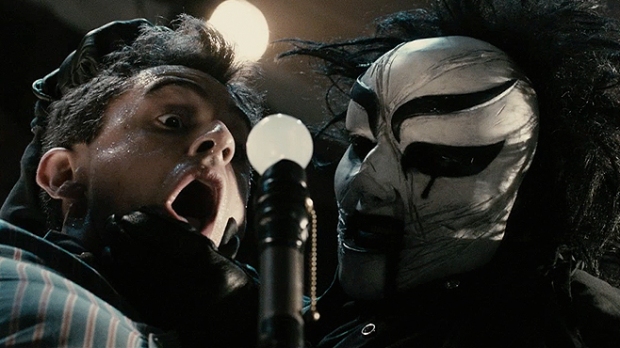 Stage Fright was something of a mystery to me prior to this morning. I knew it was a musical. I knew Sable had put together a number of noteworthy shorts. I also knew the buzz surrounding the film only continues to grow. What I didn’t know was that I’d get an outlandishly humorous, hyper gory picture that proves the standard trope can be built upon, modified and made entirely refreshing. I also failed to predict the quality I’d take in from the cast as a whole. Minnie Driver (a longtime screen crush of mine), Meat Loaf, Allie MacDonald, Ephraim Ellis and Douglas Smith (really fuckin’ awesome seeing this kid in another genre piece) all turn in excellent work. As a whole, the film totally and completely works. In fact, thus far it’s one of the best films of 2014, and vies for a spot as my favorite horror musical to ever see release, rivalled only by The Rocky Horror Picture Show. An absolute blast, and a true must-see flick, Stage Fright might be the most entertaining horror musical in history.