There’s no point in pretending I’m anything other than a hardcore fanatic for oversized creature features. In regards to premise they’re typically carbon copies of one another; an accident in the laboratory gives way to giant crawlers; a meteor crashes in the middle of nowhere, unleashing something nasty, and big. Those are the very, very familiar tropes we’ve seen recycled time and time again. And for the most part, Spiders 3D sticks to the formula.

There’s a big military influence in the pic, with a little dose of commentary affixed, but the general idea behind the picture is rinse and repeat material. Not that that’s always a bad thing. In the case of Tibor Takács’s flick, the safety of the script didn’t spoil too much, as it’s delivered via vehicle running on the fumes of the guilty pleasure feature. It’s a movie about massive man eating spiders, and there are enough running amuck to keep the entertainment alive. Is an astoundingly intricate narrative really necessary in a situation such as this? 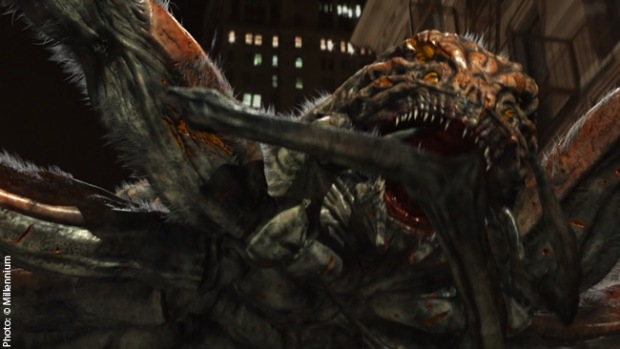 Spiders works because it’s got some critters on hand that are so over the top it’s a challenge to swerve from the endearing silliness of it all. Spiders doesn’t work if you’re eagerly anticipating the Exorcist of mega monster movies. Do yourself a favor and view this one with a light heart an open mind and an impressionable sense of humor. The laughs aren’t always originally aligned as comedic shots, but they often head in that direction, which, whether intentional or not, brings a little pleasure to the home viewer.

One of the year’s best? Nope, not even close. But it’s a kick and worth a look. Especially right now, as it’s featured on Netflix courtesy their streaming service.