Lucky Bastard sports a concept that could lead to outright embarrassing failure, or stunning success. It’s one of those all or nothing productions; I don’t see many riding the line between love and hate. You’re going to dig the shit out of Lucky Bastard, or you’re going to absolutely hate it, depending (largely) upon your opinion of smut. If you ask me, Lucky Bastard is a fuckin’ brilliant flick.

You want a new spin on the found footage film? Robert Nathan just delivered the goods.

Initially I had no idea the film was shot in the typical found footage format. The moment the film gets underway however, it makes perfect, perfect sense to utilize the good old handi-cam approach. Especially in a setting faultlessly suited for stationary cams (the film’s events take place in a home frequently used for reality projects, thus justifying the pre-installed 20-plus cameras throughout the sprawling abode, in addition to motion cams), which – in this particular case – certainly lends believability to the constant filming ideology attached to just about every unrealistic found footage flick out there. Lucky Bastard won’t offer up victims running around, fighting desperately to survive, all the while refusing to relinquish their iron grip on the camera… because, you know, someone’s got to know what happened here. No, these characters place emphasis on survival over a ludicrous insistence on shooting their final moments. The stationaries handle that for viewers.

The story is simple: Mike’s your stereotypical scumbag porn director (with a vividly jaded attitude and a dark sense of humor). He runs a number of websites that cater to multiple tastes/fetishes. Included in his lineup of adult brands is the extremely popular “Lucky Bastard”, a show in which enables fans of pornography, and subscribers to the “Lucky Bastard” website the chance to have sex with a porn star on film. Yeah, it’s basically the average guy’s fantasy. What heterosexual man wouldn’t enjoy a little fun with an adult star (given all prior tests come back clear, of course)? Subscribers send in videos explaining why they feel they deserve the right to be “The Lucky Bastard”, and Mike and his crew sort through submissions and make their selection. In this particular case the “prize” up for grabs is a performer on top of the industry, Ashley Saint – who’s extremely reluctant to shoot with an amateur. She’s against the idea from the jump, but LB subscriber “Dave G.” has a compelling story, isn’t an outright mutant looking bastard and seems – initially – harmless. That all changes when Dave shows up and the cameras roll. A premature mishap from Dave leads to chaos, as he throws Ashley Saint to the floor in a moment of panic and shame. As would be expected, Dave’s out… until he decides he isn’t out, not without the footage they’ve shot thus far. What ensues is a rampage; an unstable individual coming completely unhinged and the subsequent wrath of a man utterly humiliated. 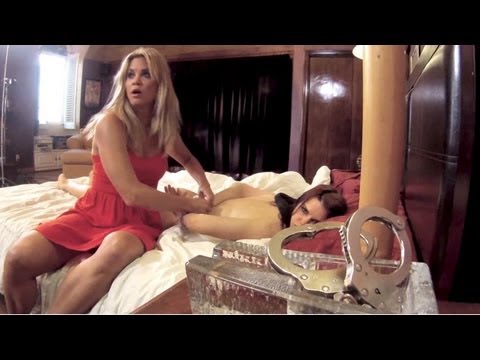 The pacing of the film is perfect, the editing polished and the onscreen performances are infinitely stronger than I’d projected. Don McManus is absolutely perfect as porn boss man Mike; Betsy Rue utilizes her body and sass to sell the role of Ashley Saint with conviction; and Jay Paulson, who portrays the pic’s unbalanced antagonist Dave is fucking creepy – to be blunt. With the assistance of standout supporting performers Lanny Joon (Niko) and Chris Wylde (Kris), Lucky Bastard proves a showcase for polished Hollywood talent that may not necessarily spend half their lives on the red carpet or fronting blockbuster films, even if they deserve to do so (which Lucky Bastard inadvertently suggests).

There are no cheesy extreme buildups affixed to this production. The entire cycle feels almost mundane, and it’s supposed to. I can’t imagine an actual spree killer queuing up deep strings and grandiose setups before they commit the act of murder. That’s the industry’s detachment from reality. Robert Nathan understands human nature, especially the darker side. That’s why this is a film that gets impact right. The expected does indeed occur, but not as we’ve come to anticipate as a result of Hollywood clichés. The disorder all feels very on-the-fly. One minute things are running smoothly, the next moment things have gotten out of hand, tempers flare and people act rash, without thought of consequence. It’s called realism. It’s what sometimes happens to human beings when there is no script involved, when there are no cameras rolling. Ironically it’s this very simplistic approach that helps Lucky Bastard shine, a complex and surprising ride of very real terror.

If you’re going to tune into a found footage film this year, test your luck with Lucky Bastard. You may or may not get your rocks off, but one way or another you will be legitimately disturbed. I’m glad marriage aided in my abandonment (for the most part… I admit… shamelessly) of pornographic pursuits.