Written by: Matt Molgaard Once upon a time Full Moon released films that weren’t intended to be outright parodies. Subspecies had a nice flare, as did Castle Freak and The Pit and the Pendulum. I’m not claiming Full Moon consistently aimed to release “serious” pictures, but there were definitely a few enjoyable, serious features produced by the prolific brand. Puppetmaster wasn’t what I’d call one of their straight edge pics, but it was indeed entertaining. The fact that we’d eventually see 10 Puppetmaster flicks hit the market is certainly indicative of a cult following and a successful concept. And why not? These are fun flicks with some goofy but respectable puppet effects in addition to decent overall production values (especially for 1989).

The inaugural film in the franchise isn’t a perfect piece, but there’s an interesting story to soak up. A true puppet master with the ability to gift life to his puppets is forced to commit suicide once he realizes Nazi spies are out to obtain the man’s knowledge in order to create their own living puppets. Before offing himself he hides his special creations. Five decades later a group of psychics learn that former associate Neil Gallagher has unearthed the puppets. Naturally they pursue the phenomenon. But when they arrive to meet with Gallagher and get a glimpse of the unfathomable, they discover that the man is dead. But dead in this universe isn’t necessarily dead, and those puppets are dedicated to their new owner who’s got an interesting secret in keeping. The problem is their new owner is also evil, and they’re all in to follow his footsteps. The aforementioned psychics are targeted by Gallagher, and the puppets are more than open to execute the group… until they realize exactly how vile Gallagher is; he doesn’t give a damn about the puppets, he simply wants to rule the world courtesy of these mystical creatures. When the puppets notice Gallagher’s disregard for the creepy critters, the tables turn and what was once a mission to execute the psychics quickly becomes a goal to slaughter Gallagher himself. 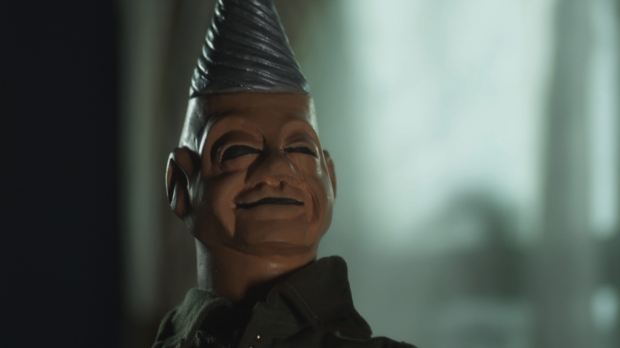 Why you ask? Because these puppets mirror their owners’ personalities. A good hearted puppet master will produce good natured puppets. An evil bastard will encourage sinister behavior. Until the betrayal of Gallagher that is, which naturally calls for a little revenge, and a trek to the other side. See, these puppets aren’t truly diabolical, they’re just heavily influenced, and when the puppet master fucks with the puppets, they return the favor.

It’s a crazy tale, no doubt about it. But it’s a blast just the same. The murderous acts of the puppets are awesome. There are some entertaining executions to take in, some outlandish dialogue and a few hilarious personality traits (yes, these puppets are more alive than one might expect) on display. The film is never intended to be taken serious, and that approach works wonderfully. The idea of selling a dramatic piece centered on living puppets just would not work. Director David Schmoeller understood this, and you can see it in his overall execution. Puppetmaster was shot with the idea of creating absurd but engaging content, and for the most part it works.

For a good throwback, beer drinking flick, you can’t go wrong with Puppetmaster. If you’re hoping for an intensely serious film, Puppetmaster won’t leave you feeling gratified. Which side of the fence are you on? Up for an over the top comedic piece, or are you after deathly serious cinema?