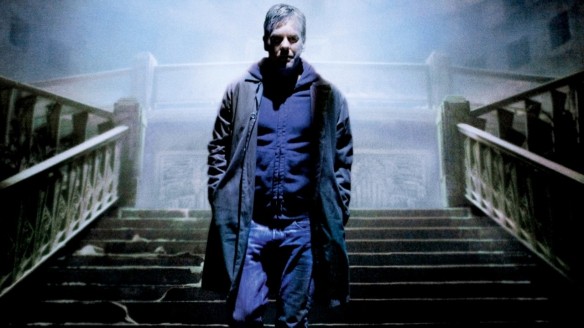 Written by: Matt Molgaard Directed by: Alexandre Aja Cast: Kiefer Sutherland, Paula Patton, Amy Smart If you’re going to look at the résumé of Alexandre Aja and attempt to cite one “bad” flick, or even the weakest of the commercial lot, you’re probably going to find yourself returning to that title, Mirrors. Mirrors lacks the charm of Piranha, the grit of The Hills Have Eyes and the sheer terrifying nature of Haute Tension. It’s also got a few very rocky transitions which feel completely out of character for Aja, who is typically quite refined on the technical end of the spectrum. But here’s the thing, while Mirrors may be Aja’s least impressive major release to date, it’s still a pretty damn good flick.

The story is an American remake of Sung-ho Kim’s Korean production Into the Mirror, which follows an ex-cop who walks into the wrong gig. Taking up post as a nightly security guard, Ben Carson finds himself in a building surrounded by mirrors. The details of the building itself are somewhat irrelevant, but the mirrors hold something quite menacing. Whatever it is inside of the mirrors, it’s fatal, and it’s intelligent. Whether Ben can figure out the mystery of the mirrors before his family is killed in callous fashion remains to be seen, but chances aren’t entirely favorable. When you think about it you’ll realize, it’s kind of hard to get away from mirrors.

The details of the screenplay are fairly solid, with Aja and co-writer Grégory Levasseur covering the majority of the bases meticulously. Some of the noticeable problems however come in the way of the dialogue, which often sputters and feels extremely unnatural. Visually the feature is impressive as we’re afforded a couple gruesome shots and some strong digital effects, and both Kiefer Sutherland and Paula Patton are striking as the pic’s leads. Yes there are a few awkward conversions that pop up from time to time, but those hiccups aren’t typical to the film. Ultimately there are more good things going for the production than bad, no doubt about it.

I wouldn’t acknowledge Mirrors when mentioning great genre films. I wouldn’t throw it in a worst of discussion either. The fact of the matter is this one isn’t remotely near as memorable as Aja’s other projects. But it’s superior to the average commercial horror release, and it’s a remake that does its source justice, which is a feat worthy of respect. Fans of Sutherland will dig this more than those who are indifferent to his work, and fans of foreign cinema will appreciate a few of the obviously intentional nods to our dedicated filmmakers over in Asia. Mirrors isn’t a homerun, but it’s a double. There are a handful of excellent sequences that await viewers, and investing in a rental fee or inexpensive price tag is quite justified.