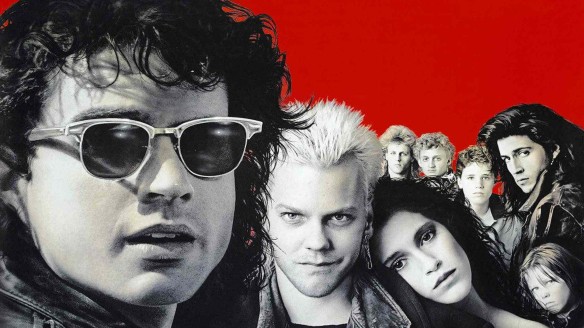 Written by: Greg McCabe Of course, there’s Bela Lugosi’s haunting portrayal of the Count in the 1931 version of Dracula. And, in my opinion, Gary Oldman did a phenomenal job in the 1992 version. And there are all the A-listers who played vamps in Interview with the Vampire. But for my money, it doesn’t get much better than a bleach blonde Kiefer Sutherland heading up a gang of dirt biking vampires. Is it possible that this rock and roll horror flick from 1987 is the best vampire movie ever made?

The plot of the film is fairly basic. After a difficult divorce, Lucy (Dianne Wiest) and her two teenage sons move to a quirky California beach town where they become entangled with the local vampire community. The mom starts a romantic relationship with Max (Edward Herrmann), the owner of a local video store. The younger son, Sam (Corey Haim), becomes friends with the Frog brothers (Corey Feldman and Jamison Newlander), who fancy themselves vampire hunters. The three of them become convinced that the new man in Lucy’s life just might be a bloodsucker.

Meanwhile, the older son, Michael (Jason Patric), falls for a local young lady named Star (Jami Gertz), who is in a relationship with David (Kiefer Sutherland), the leader of a posse of vampire hooligans. After a series of bizarre, vampire-hazing rituals—including one of my all-time favorite scenes in which the gang hangs from a railroad bridge—Michael reluctantly becomes initiated into their crew. Michael and Star have amazing fly-over-the-clouds sex. Then, vampire-related horror, comedy, and drama ensue.

I tried to pinpoint what exactly makes this movie so enjoyable, and after re-watching it with an analytical eye, I’ve realized that the answer is . . . well, everything.

This is one of those rare cases where the planets aligned and all the pieces of the movie-making puzzle came together perfectly. The story is fantastic, from the ominous, opening scenes of Kiefer and his crew lurking around the boardwalk, to the final, intense climax.

The directing is magnificent. It’s filmed in an incredibly stylish manner, without being distracting. And the brilliantly shot flying-through-the-air scenes gave the viewer an exhilarating POV experience of the vampires hunting their prey.

The cast and acting is spot on, from Kiefer to Corey Haim to Corey Feldman to the old man that played the kooky grandpa. Diane Wiest also delivered a convincing and underrated performance as a disheveled divorcée.

The script is great. The editing is great. The locale is great. Heck, I even love the soundtrack. After my most recent re-watch, I immediately went and downloaded ‘Cry Little Sister’ and ‘People are Strange’ from iTunes.

The Lost Boys is highly re-watchable, funny, scary, cleaver, irreverent, and most importantly, it never takes itself too seriously. This movie knows exactly what it is, and does a good job of being it. I’ll conclude with a few of my favorite lines from this instant classic:

Sam: “My own brother, a goddamn shit-sucking vampire. You wait till mom finds out, buddy.”

David: “Maggots, Michael. You’re eating maggots. How do they taste?”

Grandpa: “Second shelf is mine. That’s where I keep my root beers and my double-thick Oreo cookies.”

About the author: Greg McCabe is a born-and-raised Texan. His debut novel, The Undying Love, was published in 2013. Greg enjoys all genres of fiction, but seems to gravitate towards horror and science fiction.

3 Comments on Is ‘The Lost Boys’ the Greatest Vampire Movie Ever? (Review)