Legendary filmmaker, Barry Levinson’s mockumentary, The Bay probably isn’t the type of flick that is going to win audiences over unanimously. I have no difficulties in seeing people really turned off by the film. Having said that, I think there are a lot of fans out there that will get a kick out of this pic. Personally, I’d label it extremely unsettling. It’s the kind of flick that makes the viewer contemplate ever visiting any body of water whatsoever. I’m not going to compare this flick to the legendary Jaws, but the end result – paralysis at the thought of water – is certainly similar in nature.

The story recounts the tragic events during a large Fourth of July celebration in Chesapeake Bay. All festivities are going well, when suddenly people begin to freak out, and then break out, in massive boils, blisters and abrasions. In a matter of hours limbs are being eaten away by something initially believed to be an extreme virus of some sort, but there’s more to this story than meets the eye, and a lot of what’s going on can be traced back to the local water supply. Whether or not one aspiring reporter who stumbled into the year’s biggest mystery can shed a little light on the truth of the case is what we’re really holding out hope for.

The acting is on point here, and while not entirely believable (you’re less likely to buy into this than a film like Lake Mungo, but you’re more prone to see a conceivable piece here than you may in a pic like, say, Devil’s Pass), director Barry Levinson does a lot of work to make it as believable as possible. I can buy into that drive, no problem. There are some amazing visuals in the pic, including some surprisingly graphic images and a couple cool aquatic looks. I can stand in support of the cast, Kether Donohue in particular, as her character is the one responsible for creating the film, which means she’s got more involvement onscreen (and she makes the best of it) than any other one player. Nice editing (I love the mimicking of some of the expected editing styles we see on crime documentaries), nice steady pace and a strong enough finale to put a devious grin on my face. That’s a large part of what constitutes a certified celluloid winner.

I’m not sure what is more likely to happen again first, me visiting a body of water, or me watching this creepy little flick again. It got to me. It messed with my head a little bit. And, off the top of my head, I can’t think of a movie since Jaws that made me look at the water in the same light. That’s pretty relevant, in my mind. At the end of the day the goods far outweigh the bads. The Bay is one of the stronger found footage films available. 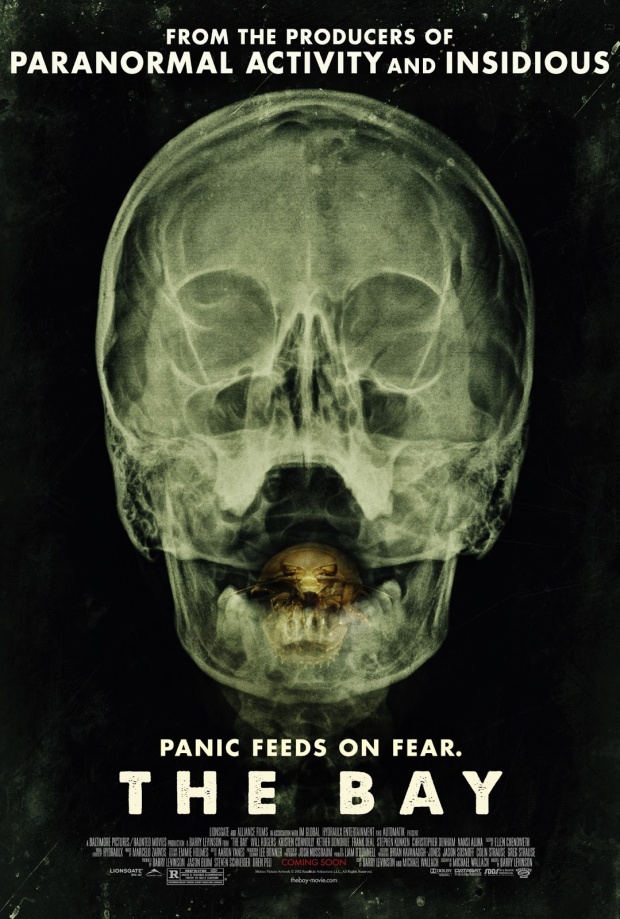