Michelle is a young woman fresh out of rehab and looking for a job. Her counselor sends her to a large imposing house, ostensibly for work. Unfortunately, instead of work she finds three crazy siblings who are determined to purge her of her past sins—with torture.

Michelle is an interesting character. She’s tough and resourceful, at least once she gets used to the idea that she’s being held captive (at first she’s pretty whiny). Despite a drunk driving incident in which she kills three people, she’s presented as nobly as possible: she was drinking in a bar and tried to defend a woman from being manhandled. After being dragged away by her boyfriend, she angrily tries to drive her friends home while still arguing with her boyfriend, and crashes instead. Her chance for redemption—saving a friend instead of leaving her behind, as she did in the accident—is obvious but thankfully not heavy-handed. There are no flashbacks or cross-cutting between the two friends or anything cheesy to invite the comparison. It’s deliciously ironic that Michelle’s stay in the torture house actually does her more good than rehab did; she finally goes from constantly saying “It’s not my fault” to taking responsibility for her actions.

There are a couple of scenes that bugged me, for example when Michelle, in a fit of pique over being shown videos meant to scare her, throws a T.V. on the floor and smashes it to smithereens. (The siblings must go through a lot of T.V.’s, as I imagine smashing them must be a common reaction from their victims.) She takes a sharp piece of the T.V. and cuts through the wall—very inventive of her—but once she’s in there, the camera cuts back to the empty room, floor included. In the biggest continuity error I’ve ever seen, there is no trace of the T.V. at all. Michelle comes out in the control room (where the siblings typically bark orders on a PA system and monitor their visitors) just in time to see home movies conveniently explaining the siblings’ craziness by showing their mother abusing them as children. Not only is this lazy on the part of the writers but also confusing, since who is filming and editing these videos is a mystery. After the T.V. shuts off by itself, Michelle picks out a screwdriver as a weapon (from a table that is positively loaded with shiny sharp things, why not take a couple?), but when she jumps back in the wall she leaves it behind, opting to take nothing with her.

Overall, I liked Darkroom. I particularly enjoy the hilariously over the top fight scene between Michelle and one of her captors that involves grabbing improvised weapons in the control room and ultimately falling through a wall. The performances are competent, the writing is (mostly) solid, and it’s original, as horror movies go. Despite torture being a major plot point, the gore is fairly light and easy to stomach. The film is short (only an hour and eleven minutes before credits), but it doesn’t feel undeveloped. Check it out if you’re in the mood to think—or laugh. 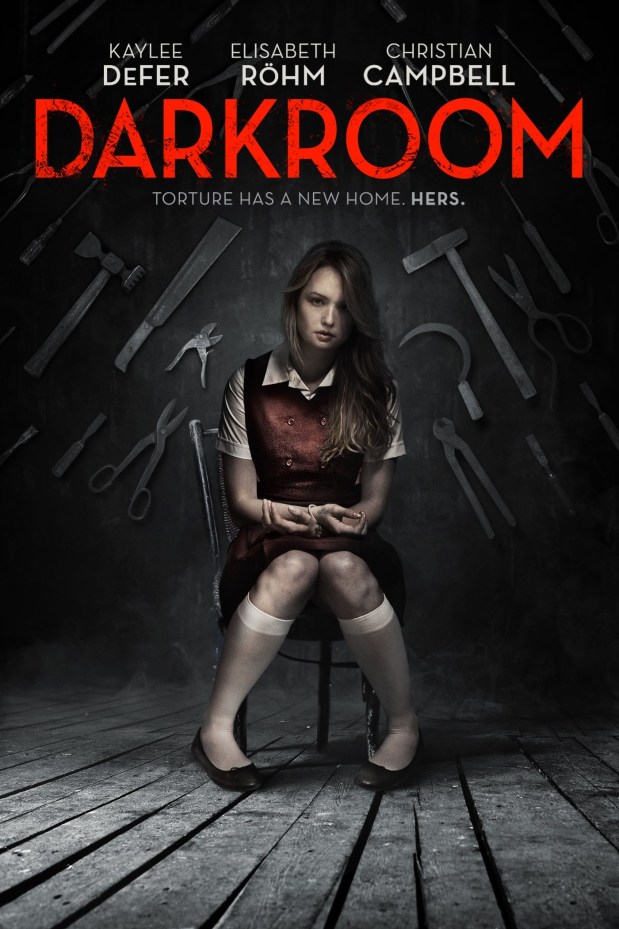 About the Author: Lois Kennedy is an avid horror movie fan who loves to write. You can also find her on Facebook and on YouTube under the pseudonym GhoulieJoe.