Creepy, refreshing and haunting; Annabelle was a true masterpiece.

I had a preconceived idea that this flick could potentially be bad. It could be a monotonous, barely scary tale of a doll with nothing more to it, no teeth or back story. In order for a horror to be a good horror that stands out from the hoard, there must be more to the movie than jumps and chills, it has to tell an interesting story, with the bloodshed and terror carefully intertwined within it. Annabelle achieves this!

This was the first time I have consciously thought ‘excellent camera work’ whilst enjoying a movie. From the super-close up shots that make the audience feel very claustrophobic, to the great footage that clearly establishes the locations. Let us not forget about the down-right eerie slow pans of the doll itself with a frightful soundtrack working in harmony with the moving picture.

So, the story. This wasn’t just a senseless bloodbath as a result of the doll, although several pints of blood are splattered, there is an interesting plot. Similar in a respect to The Grudge, when violence happens around a doll, the evil seeps into it and remains. Therefore after a horrific night with two cult members and a husband and pregnant wife, the abhorrence leaks into the doll. But it soon becomes apparent to the wife that there is still a presence in the house: a malignant one. Following this, they move, only to find it takes a lot more to expel the evil. And when they discover the object of the spirit’s desire, they are pushed to the breaking point and forced to question just how far they will go.

None of this would be possible, without impressive acting. Strangely the actress who plays Mia (the mother) is called Annabelle Wallis. I wonder if the casting director noticed that coincidence. Regardless, this beautiful lady can act! Her protective nature towards her new baby, the sheer dread she faces in the company of the doll and the apparition that lurks. Then we have the father (John) played by Ward Horton, who portrays the ideal man: a loving husband and caring father. But props have to be mentioned to the supporting cast. The priest was an interesting addition and played by the talented Tony Amendola.

I have to say there was an excellent representation of the world many years ago in America. A time where crime was just becoming a serious threat to families and citizens. A decade where the men worked and women raised the children and kept the house up.

Adding another dimension to the flick, the director (John R. Leonetti) chose to add in the theme of religion. This is common within the genre as many people flee to their faith in times of crisis. But in this case, their faith could save their lives!

But let’s get to the reason most viewers will want to watch this, is it scary? To answer that question I firmly respond with, “Yes”. There are many jumpy moments, several chunks of breathless suspense, and minutes of truly frightening occurrences. There is something so odd and unnerving about dolls that evokes fear in all of us, and this movie taps into that fear incredibly well. Dolls are almost as feared as the… dare I say it?…. Clowns. But dolls aren’t the only threat in this movie, so watch out for what hides in the darkness.

Overall, a great prequel and spin off. Shocking, scare-heavy, and sinister. A sick exploration of a doll that will quickly become iconic in the horror field. I predict Annabelle will inspire some Halloween costumes this year! 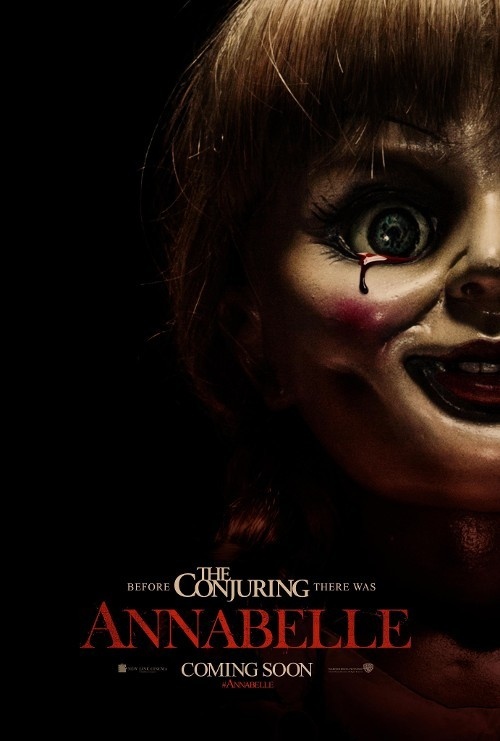 About the author: Wesley Thomas is the author of multiple novels, including The Darkness Waits. Follow his Amazon author page here.

2 Comments on Creepy, Refreshing and Haunting; ‘Annabelle’ Was a True Masterpiece (Review)