Backcountry isn’t what you’ll predict after checking out the first 25 minutes or so. And believe this: you’ll be confident in your prediction. However chances are your prediction is going to really tank. This is indeed a nightmarish tale of two youngsters in the woods, but it breaks the typical mold and then some.

Jenn and Alex are off on a brief vacation. Alex is eager to show her a location he adored as a child. The problem is that was years ago and once he’s got Jenn out in the wilderness with him he forgets exactly how to reach his destination, thus getting the two lost. But before we even get to that point, the two run into a random stranger. He’s sly, not shy and extremely creepy. He also openly questions Alex’s manhood on numerous occasions. He’s a bad guy, and… did I mention he’s carrying one damn intimidating blade?

But our friend leaves, and the next day the two find themselves lost, engaged in a game changing argument. And that’s only the beginning. They run out of food, become more disoriented and the landscape only becomes more discombobulating. And then when it can’t seem to get any worse, the two run into man-eating wildlife. And this is a problem that may be escapable.

This is a beautiful slow burn that never rushes the story, amplifying the true tension of the film. In fact the drawn out visuals pay tribute to some of the great John Carpenter’s earlier works. We get a few twists that catch us off guard, and they empower the major payoffs. The acting is excellent and there are a few genius camera techniques on display. Missy Peregrym, Jeff Roop and Eric Balfour are all top notch, and while you may begin to suspect a void in the graphic violence department, trust me: it’s coming. Stellar work from writer/director Adam MacDonald that work perfectly when paired with our onscreen talents.

I’d recommend pairing this film with The Barrens and The Grey for one hell of a man versus wilderness block. They’re all superb pictures that differ just enough to hold the attention and proffer true entertainment.

Backcountry is wicked and unforgiving (it’s also based on a heart breaking true story). And while the year is still early, there’s no doubt this one will make its way onto a few “best of 2015” lists. Watch it when you get the chance, there’s no disappointment to find here. 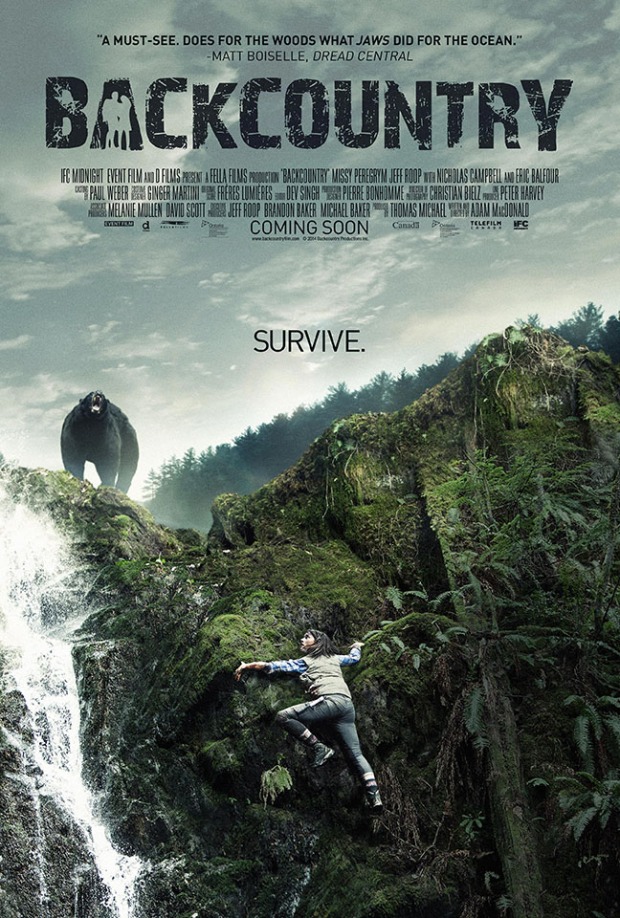