Justin Benson and Aaron Moorhead, known for their Indie hit Resolution and for their segment in the V/H/S Viral, “Bonestorm”, have delivered a very rare type of horror movie in Spring. It moves at a very slow pace, has very little horror, is quite beautiful and could just as easily be described as a romantic drama. To most horror fans that might sound boring but trust me when I say the writer/directors have made something truly special here.

The story starts with focus on Evan, who is a chef at a local bar, that – after his mother dies of cancer – leaves for Italy where he gets a job as an olive farmer and meets a beautiful girl named Louise. After just a few days they develop a strong connection and he finds that he is falling in love with her. Like I said, it doesn’t sound much like a horror movie, but where the horror comes from is Louise herself, who has a strange and dark secret  which if left unchecked could cause untold damage to those around her. I would love to go further than that but knowing as little about this movie as possible is key to enjoying it to its fullest, even the trailer gives too much away (I feel).

The movie is beautifully shot and very well acted, the final moments (which I won’t ruin here) are so well shot and so well acted they nearly brought a tear to my eye (nearly). I watch a lot of horror movies and it’s rare for me to find a movie that is so well shot, acted, written and directed all at once. Both leads, Lou Taylor Pucci and Nadia Hilker are great and their chemistry is unmistakable.

I’m going to have to go into spoilers to give praise to a specific part of the movie, so if you really don’t like anything spoiled just skip this paragraph. There are several transformation scenes throughout the movie and all of them are done fantastically well; the mix of digital and practical effects are handled wonderfully. One scene in particular which involves a half woman half squid hybrid looks incredible. That might sound strange given the movie’s description but it works in context.

I can’t stress this enough: Do not watch this expecting a full blown horror movie! The body count is very low and even then the gore is delivered in minimum fashion, but if you’re in the mood for a love story with strong horror elements that is beautifully shot and very well acted you won’t go wrong with Spring. 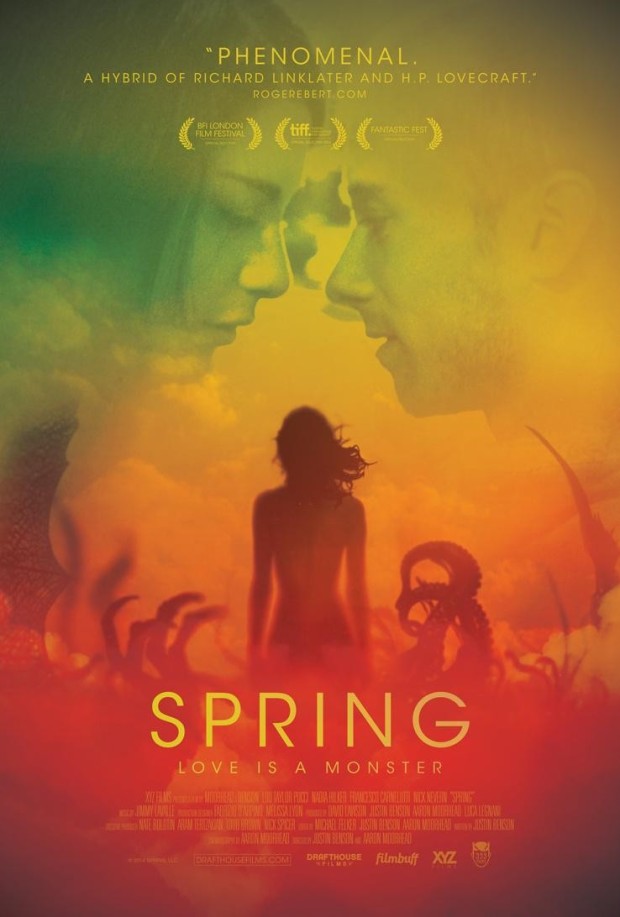