On the anniversary of their friend Laura’s suicide, five pals are having a Skype conversation (which is how the entire movie is filmed—on Skype). A stranger joins them, claiming to be Laura. Laura blames them for her death because following the posting of an embarrassing YouTube video, they contributed to the comments section that advised her to kill herself. Laura starts picking them off one by one. The survivors are taunted and forced to play a cruel game in which they have to reveal terrible secrets about themselves. And then are killed some more.

I saw this movie in the theatre and shortly after wrote a rough draft of this review. Then I totally forgot about it. Which goes to show how un-remarkable the movie is. Which isn’t to say I didn’t enjoy the experience; I saw it with my good friend Senta, and we had a total blast—making fun of it. We cracked jokes pretty much the whole damn movie. As I whispered to Senta, “There is nothing scary about a ghost who makes memes.” Just the memory of said meme, which shows a picture of one of the characters throating a hot curling iron and an epitaph proclaiming that she “finally STFU” makes me laugh. As did when a character, frustrated with the situation, stalks off. Senta said, “BRB. AFK,” which cracked me up. And then she was laughing because I was laughing, and finally I had to cover my mouth because I didn’t want to be rude to the people trying to be scared.

Aside from the ludicrous nature of how ghost-Laura operates, the living characters are unbelievable as well. Laura tries to upset her former friends by making them tell shameful facts about themselves. For example, it’s revealed that one of them slept with another, despite having a boyfriend and claiming to the boyfriend to be a virgin. This begins a screaming match between the three of them. At this point in the movie, two of their friends have died, and the past doesn’t seem like something to be worrying about at the moment, since they could also die at any time. There are absolutely no likable characters. Besides the fact that they told their humiliated friend to kill herself, they do nothing but squabble and betray each other in increasingly unlikely ways. But even Laura is difficult to feel sorry for; the video that prompts her suicide is of her having pooped herself while passed out drunk. While it’s disheartening that a crowd of people urged her to “kill urself,” it’s not a good enough reason to empathize with her.

I’m not a fan of techie ghost movies in general; they tend to be full of plot holes and ridiculous situations. This one takes it to the limit with a ghost operating through Skype, Facebook, and YouTube. I do admire what the filmmakers tried to do. The theme that technology can dehumanize us goes well with the theme that cyberbullying is harmful, but the film is poorly executed. However, it wasn’t all agony. The scene of a character putting his hand in a blender is shocking even though it’s included in the trailer. The gore is at a tasteful level—disturbing, but not overstated.

Filming a movie on a webcam is somewhat original (The Den beat them to the punch), but to me it smacks of laziness. At the same time, it makes for an interesting narrative structure. Nevertheless, ultimately the scariest part of Unfriended was the trailer for Sinister II. See it if you’re in the mood to LOL. 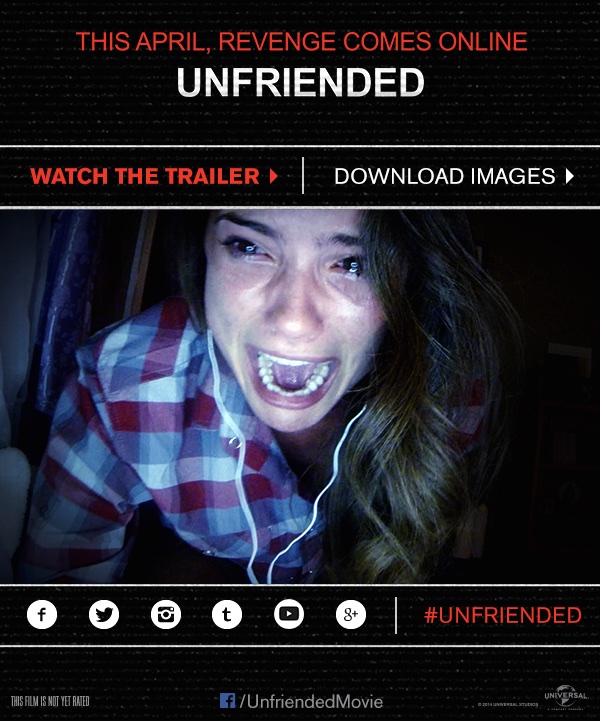 5 Comments on ‘Unfriended’: Can I un-pay the money I spent to watch this? (Review)