Just to bring you up to speed, in the sirst episode of MTV’s Scream we learned that a few decades ago a deformed kid named Brandon James found himself head over heels for a young lady named Daisy. The school jocks didn’t take too kindly to that and they served the poor fellow up a serious beating. So he did what all victims do (right?), he started killing those douche bags off. We later learn that Daisy steps in on something of a sting, luring Brandon to a quiet dock, where law enforcement guns the kid down, sending him into the water, blood leaking.

Fast forward to modern day and we see that Emma, Scream’s heroine, is the daughter of Daisy, and it seems a new (presumably) killer has once more targeted Daisy, or more specifically, Emma and the immature youngsters she runs with. The body count begins and so does the mystery.

Episode two kicks off with a look at Rachel, one of the series’ more troubled teens cutting away on herself. She’s obviously got some problems. It could be the fact the she got busted making out with another girl, which was caught on camera, spread online and has subsequently begun to ruin her life. But anyway, the real kicked here is the fact she’s the episode’s first (and possibly only) victim, as Ghostface gives her a ring, plays some nice heads games and then pops out to wrap a noose around her neck and chuck her over a balcony, neck snapping like a twig instantly legs dangling.

We move right into all kinds of high school chatter which feels pretty hollow. We’ve got a couple guys with some degree of motive to go on a killing spree, but these all feel like obvious red herrings. I suppose one could eventually prove to be the actual killer… we’ll see.

We meet Piper Shay, who stands in to take on the Gale Weathers role. She’s a little antagonistic and pushy, but she could prove likable. Eventually she and Emma meet and it goes a bit smoother than the meeting between Gale and Sidney in the original film.

More goofy high school drama. It’s not particularly entertaining despite the fact there are a few characters being nurtured here and we get a mass mobile message from Ghosty. Payback’s a bitch. There are a small handful of personalities wandering the halls that feel like fodder. Their stories don’t get much attention and they’re not exactly engaging.

Midway though the episode we see a brief chase scene between the killer and Emma. Just as the killer seems as though he may close in, not-so-nice boyfriend Will shows up and saves the day. Feels like another obvious look at Craven’s film, which begs the obvious question: Could he and his toolbag buddy, Jake be our killers? Seems too obvious, unless the screenwriters are underestimating Scream hardcores.

The episode nears conclusion as Noah again finds himself in trouble… or does he? Nope. What actually happens is he and Riley, one of the players that blends into the background, hook up for a little star gazing. These two start making out and it feels like a good time for an appearance from the killer. But we don’t get it.

More teenage melodramatic hooplah and we’re about ready for the finale sequence.

Emma’s at home alone. Her house alarm goes off and she finds the backdoor wide open. “The security company” calls to verify her code. And of course, it’s the killer… who now has the alarm code? He gives her the old Ghostface routine. It’s a fair sequence, a little creepy – we’re waiting for the inevitable attack, but the episode comes to an abrupt halt.

A decent episode with a bit too much filler for my taste buds. I don’t really relate to teenagers these days, to be honest, so a good half of the episode was a war with my attention span. But the brutal hanging, the meeting between Emma and Piper and the final sequence make it a worthwhile watch. 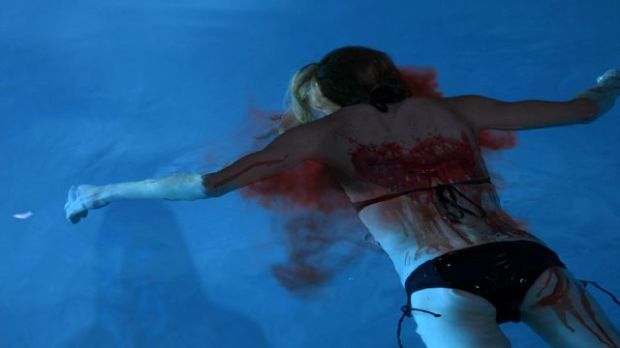