I just got done watching Zombeavers so I thought after watching a group of aquatic rodents chew their way through a bunch of college kids, it would be the perfect time to reflect and relay my thoughts on a very slow, low key, sombre British ghost story.

When Mark and his young teenage son Tommy are forced to squat in an abandoned flat on a London council estate that’s soon to be demolished. Tommy starts hearing strange noises from the flat next door, unnerved he seeks the help of his new friend Carmen after she saves him from being mugged. Now it took me a little while to process this movie as I hadn’t seen anything like it in a while, not that it’s incredibly original but it’s been a few months since I have seen such a slow burn ghost story, and even longer since I have seen performances that are so grounded and realistic. The plot is a little more complicated than I have let on, but I feel that this movie is best viewed knowing only that it’s a ghost story set in an abandoned London estate. The plot is very simple and to delve any deeper than that would ruin what few reveals this story has to offer. That may seem like a negative but it’s not, a well told story is still a good thing, no matter how simple it may be.

Clem Tibber as Tommy is the perfect blend of shy, awkward and vulnerable. He looks, acts and feels like a young man very much out of his element, and for the most part very alone, living in an abandoned flat with no water or electricity and boarded windows. He spends most of his time alone in near perpetual darkness as his home is lit only by a portable electric lantern. He sits alone sketching in an old notepad and listening to music on an outdated CD Walkman. It’s pretty depressing watching him sleep on an old mattress in what must be a freezing cold room with its wallpaper beginning to peel away from the walls. Like the movie, his performance is very low key and fits in perfectly with the tone of the film. He rarely smiles and until he meets Carmen, seemingly has no friends. His life seems pretty bleak and his strained distant relationship with his father is just one more reason to keep a smile of his face.

When Carmen is first introduced she shows little interest in Tommy, but the more she sees of him the more she grows to like his awkward and shy nature. Elarica Gallacher – like Tibber – delivers a very natural and grounded performance, but whereas Tommy is shy and awkward Carmen is very much the opposite. When she sees Tommy about to be mugged by three older thugs she grabs a stick and then proceeds to swing it like a battle axe beating one of them to the ground before they all flee; unlike Tommy she’s strong willed and doesn’t back down from confrontation.

As mentioned above this is a slow burn. The movie takes its time and develops its story slowly, and thankfully there are no false jump scares (I seriously hate those, they just deflate any tension built up with a loud music sting, it’s not fear it’s just shock, there is a difference). But when Tommy begins hearing strange sounds it’s creepy, as he sits alone in his room – lit only by that small electric lantern – hearing the sound of anything moving around would be enough for me to utter the words “fuck this” and run. But if Tommy had done that we’d have no movie. When he asks his father he’s told the flat next door is totally sealed and no one has been in there for months. Then he begins seeing an intruder – then the noises get louder and things get even stranger from there. The movie is a little light on scares but it does a great job of maintaining a persistent creepy atmosphere and the scares that are present are well done and nicely constructed. The only problem I had was one of the major plot points seems a little too convenient (no spoiler here) but that’s a small gripe and it was easy to look past.

Bolstered by strong direction, a creepy score and some fine handheld camerawork The Forgotten is easy to recommend to fans of slow atmospheric horror. The location alone is enough to illicit a few tingles up the spine, when you add strange noises and almost constant darkness its genuinely creepy. It’s a very character driven horror film and although it is light on action it is thick on atmosphere and the trade off seems worth it when you add the strong acting and polished story.

One last thing has to be mentioned: I won’t ruin it, but the last scene in this movie as well as the last line are so perfect that it bumped the rating up half a grade. There’s no huge twist or big revelation, just a small exchange of dialogue that wraps up the movie so well I had to make mention of it. 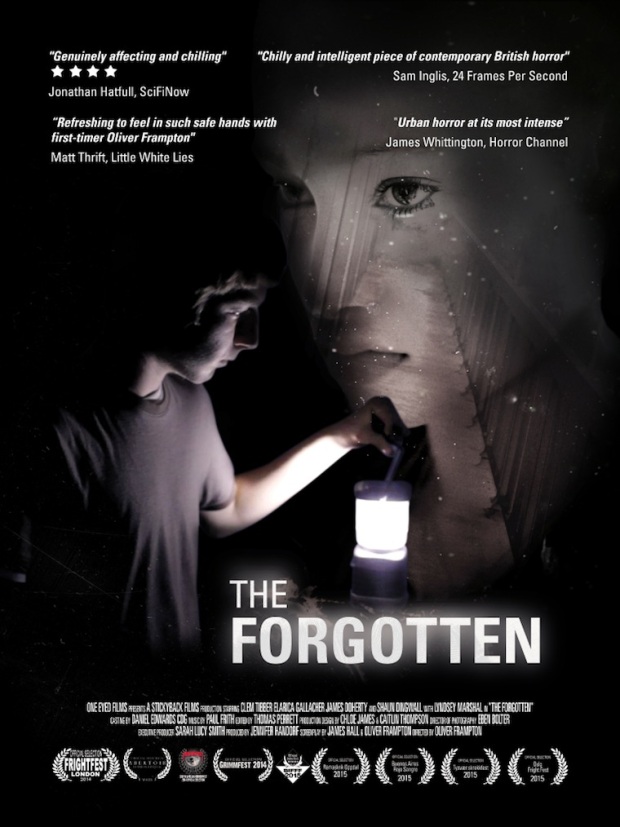