They’re Watching isn’t an earth shattering handy-cam flick. It isn’t a monumental moment in horror history. It isn’t the next Evil Dead, or A Nightmare on Elm Street. They’re Watching is a flawed piece of work, but it’s also an extremely spirited production that brings strong performances to the forefront of a lengthy journey that culminates in 15 of the craziest minutes you’ll see on a screen this year.

Despite a set of relatively safe plot points it’s easy to feel the passion and effort in the film. Everyone involved really invests in the project and that, coupled with that head-spinning climax, position They’re Watching in a comfortable place in the found footage race. This movie is a lot more entertaining than a good portion of sub-genre efforts I’ve seen this year, and I’ve already seen a shocking amount of POV movies in the first quarter of 2016.

Being that the film impresses it should come as no surprise that I’d immediately jump at the opportunity to pick the brains of Jay Lender and Micah Wright, who together wrote and directed They’re Watching. There’s some wonderful insight in the following Q&A session. Give it a read! 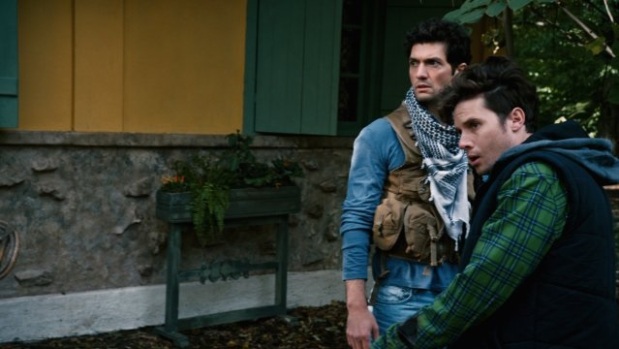 Addicted to Horror Movies: They’re Watching begins as a relatively standard found footage film. What were your goals – through the first two acts of the picture – to draw viewers completely into the fold?

Jay Lender, Micah Wright: Ah, the dreaded F-words.  We don’t say Found Footage because our footage wasn’t “found”–It’s not like the police dug up a bunch of videotapes by the side of the road–this is a film crafted by our lone survivor, who happens to be a professional filmmaker. It’s “First Person Thriller”, and having distinction that freed us from some of the constricting rules of the Found Footage genre. For a while we debated; should we have a score? Well, our survivor knows that no professional filmmaker worth their salt would release a thriller with no score–even one that chronicled the deaths of their friends!

As for the first two acts, the goal was to make you fall in love with our characters. There’s a slow burn in this movie, where we’re watching funny people doing their jobs, unaware as the storm gathers around them.  In that sense, we like to think of our movie as a workplace comedy that goes terribly, terribly wrong. In some horror movies the audience spends their time wondering “how will these people die?” In ours, we think the audience will be thinking “I hope they don’t die!”

ATHM: You cast both Kris Lemche and Dimitri Diatchenko, two thespians familiar with found footage productions. Was the decision to cast these two intentional, or did they just happen to be two who really impressed you in the casting process?

JL, MW: Literally, they were both the best guys who walked through the door. After we found out they had been in previous–ahem–first-person films, we had a long intense conversation, but the desire for great performances outweighed the need for new faces.  And we never looked back–we cannot wait to work with both of them again in the future.  We’re so thrilled that American Horror Story has set the precedent of using the same actors in dramatically different roles for sequels. Don’t be surprised if they show up again in a sequel!

JL, MW: The entire film was shot in Romania, the next country over from Moldova. Moldova was a republic of Romania that Stalin broke off and turned into a separate country, they speak Romanian–though an ethnic minority speaks Russian, which was great because Dimitri does, too! Romania looks similar to Moldova, and most importantly, we were able to find a local film company production partner in Romania, but not in Moldova.  It’s kinda like how every episode of “CSI: Miami” was actually filmed in Long Beach, California. 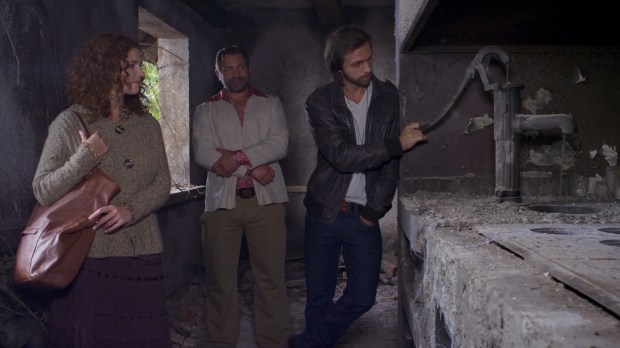 ATHM: What, if any challenges do you run into when you’re shooting in foreign territory?

JL, MW: Language is always a high hurdle… but most Romanians in the film industry speak English.  Then there’s the cultural stuff.  On our second day in country, our Unit Production Manager took us out to eat, and the second we stepped into the restaurant, every single person in the place stopped eating and stared at us.  That moment was amazing, because we had written one just like it for our characters, but for us to feel it personally, in real life, really drove home the creepy feeling of being an outsider. That made it easier for us to direct those moments when they came up.

ATHM: I don’t want to give away the conclusion of the film, as it’s… well, a pretty explosive climax, but I’d love to know how arduous it is turning visual effects into convincing action sequences?

JL, MW: It’s definitely a crazy sequence! We knew we didn’t have time or money for playing on set, or for reshoots or complicated post-production fixes, so we opted for the time-tested animation method–knowing what the hell you want to put on film before you drag 80 people out into the forest at 3AM.  We storyboarded every second of the last 14 minutes, months in advance–550 panels worth–all the way down to the camera moves, lighting cues, and character action. We were meticulous on set and in post-production; everybody always knew exactly what we were trying to capture on film.  In the end, we put together a fairly seamless 10 minute scene–like Birdman-on-a-Budget, but with explosions, full-body burns, and people being catapulted through the forest canopy.  When you pre-plan everything to the smallest detail, you can do wonders.

ATHM: Furthermore, that finale looks like a blast on screen, did you have as much fun shooting that as I did watching it?

JL, MW: Yes. Although by then we were into early October, and that is one cold time of year for Romania.  We live in Los Angeles… neither of us has been that cold for years.  It started snowing full-time two weeks after we left the country, and they’re like Maine up there… big 9-foot snowdrifts.  If we hadn’t finished when we did, we would have had to hole up in the mountains, eat our crew, and wait for Spring to get our last 15 minutes on film.

ATHM: I know that this is your first feature length directorial gig, can you give us some insight on the process, and is the director’s chair where you’d like to be more often in the future?

JL, MW: It is our first film, but we’ve been directing or designing or storyboarding on projects for years and years.  We simply put the skills we learned in Animation and Videogames into play with human actors and live sets.  Typically that jump from animation to live-action goes well, like with Brad Bird directing Mission Impossible 4, or Tim Miller directing Deadpool.  It IS harder in some ways, but it’s also easier in others.  We have a saying that a director has to be good at every job on set, but if he or she is BETTER than anyone on the set at their job, then that person needs to go. But in the end, the job is about taste. We have a vision of the film in our head, and we have to guide the cast and crew to get as close to that vision as possible. We’re cheerleaders, ringleaders, and most of all deciders. People come to you with questions all day long and you’d better have answers. If you don’t then the panic sets in, the whispering begins, the pitchforks and torches come out, and you’re running for your life.  We love the job and can’t wait to shoot more films.  After years of helping other people get their visions on screen, it’s time for us to put our own ideas out there.

ATHM: I’ve got to know: How do you go from working on projects like SpongeBob SquarePants and Call of Duty to an outright horror piece?

JL, MW: We’ve been writing films for a while, but we focused on big-budget blockbuster material, because that’s what you need to have in your portfolio to get open assignment jobs writing James Bond movies or superhero films.  But there’s super-intense competition for those kinds of film jobs, and we realized we needed to have something produced before we’d be in contention.  Horror is cheap and profitable, so it’s the safest way to establish a track record of bankability. We’re both big horror nerds, so once we had that epiphany, it was easy to change gears.  We’d long had a funny idea for a horror movie sitting in the ideas file; House Hunters International meets The Wicker Man.  So we just grabbed it, dusted it off, updated it and wrote it.  People liked it, we met a producer who thought he could come up with some money… and here we are.

ATHM: How different was that for both of you?

JL, MW: Animation, games and film are all highly collaborative media, but because film is captured live, you’re often at the mercy of your actors’ choices.  In animation I can take a scene from one animator and hand it to another, but I can’t re-cast my lead actor for one scene.  That said, knowing that our actors are professionals–and have something amazing to bring to the party–made it a treat, as well as an education to work like that.  We didn’t have any Frank Oz/Marlon Brando moments on this film.

ATHM: Do you plan on investing more time in the horror genre in the future?

JL, MW: Absolutely.  Horror fans are the best, they tend to be very eager to see new material, they often have encyclopedic knowledge for the genre and appreciation for improvisation within the tropes of the genre. They’re loyal… they follow your career, they go see your sequels, they come out to see you speak, etc., and most of them still go see movies in the theater, unlike a lot of normals who just download this week’s new releases stolen by camcorder and watch them on their phones. For the rest of our careers, when we have a horror idea, we’ll make a horror movie. We’re not looking to jump ship.

ATHM: And finally, you know I’ve got to ask: assuming They’re Watching does well with the public, could we potentially see a sequel?

JL, MW: When we were shooting the finale we pitched a sequel to the actor who plays our one surviving character, and asked if they would come back. We’ll never forget their answer: “I would make twenty-six of these with you.”  So would we!  And it’ll be bigger, smarter, faster and–in all likelihood–bloodier. We expect to use more cameras for faster cutting– drones, rovers, steadicams, helicopter shots, etc.–all things that would be used by the crew of the particular show we intend to lampoon. And what show is that? We’re not telling, but it won’t be a home improvement show. We have stories for three films, and ideas for dozens more, should They’re Watching do well.  So go see it, everyone! In select theaters and On Demand everywhere on March 25th!

Addicted to Horror Movies would like to thank Jay Lender and Micah Wright for taking the time to talk with us. We’d also like to thank the remainder of the cast and crew for working to give us something genuinely entertaining!