With all the turmoil surrounding Victor Salva and his latest production, Jeepers Creepers 3, fans have begun to question the progress of the film. Some are even of the mind that the flick will never be made, a direct result of Jeepers Creepers creator, Victor Salva’s shady background.

We’ve seen a casting call canceled already, but that isn’t going to slow the momentum of this one too much.

According to producer Stan Spry, who took to Twitter to address the concerns of a fan, Jeepers Creepers 3 is not cancelled. Producers are working on the domestic distribution deal.

You can check out the tweet below Breathe a sigh of relief, we will definitely see Jeepers Creepers 3 soon! 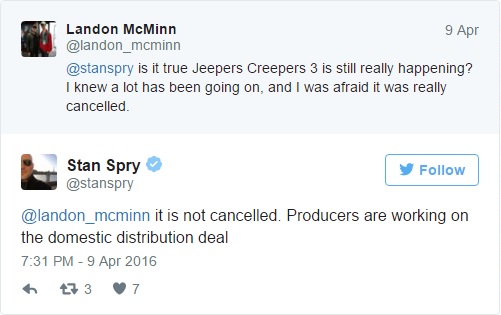