Robin is a teenager mourning the suicide of her friend Ethan in the most appropriate way possible—playing flashlight games with snobby popular kids in the woods where he killed himself. Covington Woods is the local haunted forest, known exclusively for terrible deaths and possession, so what better place to wander around in the dark? Predictably enough, the five teens are picked off one by one. After the least obnoxious character is killed off first, it’s a race to see what stupid shit the rest of them do before they meet their doom.

The movie had big potential; a forest that contains a mass of pissed-off ghosts is a creepy premise (though it’s been done). However, the movie can’t decide whether it’s a teen romp slasher or a serious horror movie. There are attempts at scares like the forest’s eerie rules: use flashlights as little as possible because light attracts the ghosts, stay out of the church because they wait there, don’t write your name because that means definite death. The filmmakers show restraint on the gore factor, too.  But the characters are standard slasher movie cutouts; for example, Chris is a sex maniac who jokes about “ghost blow jobs” while Nia is the evil girl who never dies first even though we all wish she would. There are one-liners, which usually I hate, but I have to admit I enjoyed this exchange: “Who are you gonna call?” “Please don’t set me up like that in a haunted forest.” Yet then there are touching moments, like when Robin pleads, “Ethan. Don’t hurt me.” 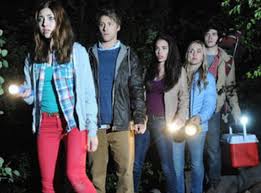 Scooby Doo never crossed my mind until I saw this picture

Overall, I have more gripes than compliments. It’s derivative of The Blair Witch Project and Paranormal Activity. Eventually the characters’ neverending wandering around becomes tiresome. Despite a short running time of an hour and 17 minutes, the ending feels completely and unnecessarily dragged out. Too much of the attempted scares are just loud noises. The attempts at exposition fail miserably; Ethan is introduced with a caption that says he killed himself, the keychain Robin made him is given multiple close-ups, Robin finds Nia’s camera, conveniently cued to a scene wherein she and another of their group are talking about her, Robin says every single thought in her head. Did I mention that it’s shot from the point of view of Robin’s flashlight? As much as I complained about Unfriended, it looks like a masterpiece in comparison—at least the suicide issue was handled with some thought. Give it a look if you’re in the mood for something competent but not memorable.