I really, really love puppets.  Some puppets are friendly (Sesame Street, The Muppets) some are  weird (Fraggle Rock), and some kill people. For fun. That’s right, this is a list of some of the coolest, strangest puppets (or dolls) from Horror movies. Like my previous list, I tried to include a healthy mix of popular, well known puppets and obscure, lesser known puppets. This means Cookie Monster didn’t make the list. Sorry, fanboys. 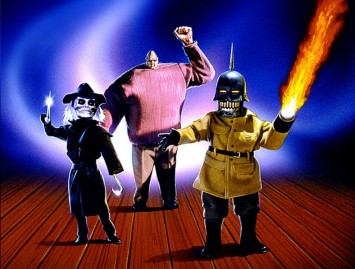 These little rascals are always up to something, be it murdering a group of psychics or taking down Nazi Germany. I’ve been working my way through the entire series this week and, while I can’t speak for the quality of all the movies (most are shit), I can say that the evil puppets are always awesome, even if they are sometimes in only like ten minutes of the movie. We’ll have to see what happens now, since a remake of the puppet master series was announced. I really respect the Puppetmaster series for staying pretty true to practical effects. Hopefully the remake will follow suit.

This is a weird entry, because it seems like one of the only instances where the movie flat out acknowledges that the puppet isn’t real. In some movies, the puppets are obviously alive (Puppetmaster) and in others, it remains more of a mystery (Magic, Pin).  I’m not the biggest fan of the Saw movies, but I applaud them for getting creative when it came to the Jigsaw Killer’s calling card. I guess I was always kind of left wondering how in the hell they operated that thing, though.  Was it remote controlled? Was Jigsaw hiding no more than four feet away operating the puppet? Or, was it (gasp!) actually alive?

This movie came out about nine years ago so I don’t feel too bad spoiling it, but just in case you somehow missed Dead Silence and still wanted to watch it stop reading and skip to #2 and go watch it. It’s on Netflix.

The amazing twist at the end of Dead Silence is that our protagonist’s father, Edward, has actually been a human puppet the whole time. He’s been dead and operated by other people.  Usually a holy shit moment like that makes the entire movie worth it, but it ends up being a cherry on top of what was already a solid haunted puppet film. For another instance of human puppetry, see the famous Criminal Minds episode The Lesson.

Pin centers around a medical demonstration dummy named Pin brought to life via ventriloquism by a Doctor who is the father of two children. Of course, it gets a little more complicated than that when their father dies in a horrible accident but the children still hear the voice of the puppet after hes gone. It gets even more complicated than this when the dummy  becomes sort of a weird, Lady Macbeth/manipulator figure for the son, Leon. It gets EVEN WEIRDER when some strange incest stuff comes into play. Lots of stuff happens from here and, as a whole, it’s not that great of a movie.  The plot seems to be going along just fine and then it sort of derails in the second half. But it gets some major points in the puppet department. It’s creative. It’s creepy. Check it out just for the sake of the puppet. It’s one of the few puppet movies that keeps you guessing as to whether or not the puppet is actually alive the whole time or not.  We see the father use ventriloquism to animate it early on, but after he’s gone, what’s keeping It talking?

1. Brahms from The Boy

With a few exceptions (I’ve listed some here) the question “is this thing alive or not?” isn’t really posed in many puppet/doll movies anymore. I guess the first Childs Play kept us guessing for a while, but they really didn’t keep it a secret that long. And since we know Chucky is alive by the first little bit of the first movie, any subsequent sequels or remakes sort of spoil the mystery.  The Boy, however, keeps us guessing up until about the last 20 minutes. Which is impressive. And awesome. And it makes for a badass movie. The Blu-Ray hasn’t come out yet (it’s released May 10th) so I don’t want to tell you anymore or spoil anything for you just in case you missed the theatrical run. All I will say is, if you haven’t seen it, pick up the Blu-Ray rent it on VOD.  If you are a fan of doll horror or just plain horror, you’ll love this one.