Animated retelling of five Edgar Allen Poe stories. “The Fall of the House of Usher” is told by Christopher Lee, “The Tell-Tale Heart” is narrated by Bela Lugosi, “The Facts in the Case of M. Valdemar” is read by Julian Sands, “The Pit and the Pendulum” is acted by Guillermo del Toro, and “The Masque of the Red Death” features the voice of Roger Corman as Prince Prospero. Meanwhile, there’s a wraparound story about Poe’s spirit trapped in a bird having a conversation with Death (voiced by author Cornelia Funke).

Sound a little weird? It is, but the notable cast makes it worth watching. Their performances are fabulous across the 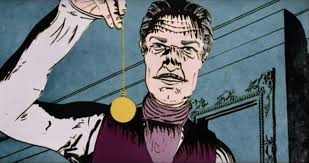 board. Even though Lugosi’s archived voice sounds tinny, the strength of his delivery compensates for it. I had my doubts about del Toro’s ability to read convincingly, as directors don’t make the best actors (cough cough Tom Holland in Hatchet II), but his hushed vocals and soft accent made listening to him a delight. Even Corman (who has exactly one line of dialogue) manages not to blow it. Funke also impressed me with her detached yet sensitive portrayal of Death.

Aside from the voice work, the score is properly eerie and the animation is stunning. Each segment looks completely different. “Usher” is Tim Burton-esque, with long, gaunt skeletal figures, while “Valdemar” looks inspired by the EC comics of the ’50s (and the main character bears more than a passing resemblance to Vincent Price).

“Heart” is based on the artwork of Alberto Breccia, and “Pendulum” is CGI’d and reminds me of video games like Assassin’s Creed (but without the cheesy fake accents). “Masque” features vibrant, rough watercolors. I have a feeling I could have muted the sound and just watched the animation. Give it a look if you’re in the mood for something short, gloomy, and creepy. At the very least, check out the trailer.