Venom is one of those movies I had heard about off an on over the years, but had never got a chance to sit down and watch until recently, and I must say I really feel I missed out by not seeing this movie years ago. Some movies seem to have more impact if you see them young, and while this movie is pretty good, I think it would have had more of an effect on me had I seen it when I was younger. That being said, it definitely can hold its own next to many of the mass produced thrillers of its day, mostly, because it isn’t just a typical kidnapping/hostage situation as we have the added dynamic of a deadly snake on the loose.

Films like this tend to get lost over the years sometimes, as trends come and go, interests change direction, and everyone’s looking for the next exciting new thing to follow. A good, fresh idea, gets copied and imitated so much that people begin to get bored, and the few people still devoted to them aren’t enough to keep some of these titles afloat. Luckily there are always those devoted cult followers who try to pull movies like Venom out of the wreckage and try to get them the recognition they deserve. They push for re-releases, more features, and simply promote viewership of these otherwise lost little gems. It’s always nice when these voices are heard, because Venom is one of those movies that deserves a chance.

The plot starts simply enough, a 10 year old boy is to be kidnapped and held ransom, involved are some of the families trusted servants, and one international terrorist. Things start to go awry nearly immediately as they are also going to have to contend with the boy’s grandfather who is staying at the home, and a deadly black mamba which has escaped within the house. Add to this the general mistrust between the psychotic chauffeur (played by Oliver Reed) and the terrorist (played by Klaus Kinski) and the recipe for disaster is all too apparent. The tension builds as the deadly snake takes it’s first victim, and you see the race for time as the police become involved and aware of the snakes presence within the house. 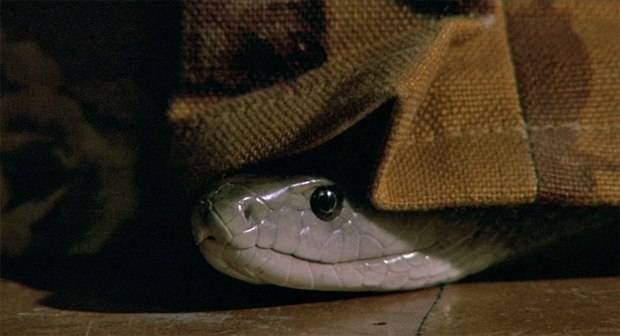 While this may have been a decent thriller, with this cast of characters, even without the addition of the black mamba, I think the use of the deadly snake added another dimension to the film that bumped it above some of its genre’s competitors. Then too, I am glad this wasn’t just a deadly creature movie and had the terrorist angle going. Meshing these two elements up worked well for this story and kept the tension level high through most of the film. And to be brutally honest I personally think the biggest thing that kept this movie alive is hosting a cast that included such well-known names in the thriller and horror genres.

While this movie could have been forgotten, I am glad that it was not. The actors play well off one another, they are believable and at times engaging. While you find yourself wanting the snake to appear and strike, it keeps you at bay, for just the right moments, so that in this way it isn’t overdone, as the intention of this film was not to just rack up a body count. The focus really was on the tension of the kidnapping, you just had this wildcard of the loose black mamba in play. At times this movie can be an edge of the seat thriller, and that keeps you interested, keeps you waiting for that moment when everything really starts to unravel, and you know there’s no going back

This film definitely would hold appeal to anyone who enjoys a tense thrill ride loaded with kidnapping, seduction, standoffs, and one deadly creature whose bite will leave you writhing in agony. Movies like Venom have stood the test of time because they are truly for the devoted action/suspense fans and cater to their whims. For those people who think, yeah terrorists and kidnapping are great but hey, what if we throw in the deadliest snake known to man and have it loose in the house? Plus, it’s really just fantastic to watch Oliver Reed and Klaus Kinski square off! In my opinion, this is one to check out, you really just have to see what happens, especially between the characters, in this formidable film