Most of us have wondered why the 1990 mini-series adaptation of Stephen King’s It has never seen a Blu-ray release. It’s a topic long debated around the water cooler, by genre-themed media outlets and public forums. Why in the world have we never been afforded the chance to check out the film on Blu-ray?

If you check out the movie these days, you’ll probably note the extremely dated look of the film. There’s no telling what kind of an impact a transfer to Blu-ray will produce, but we’ll no doubt see a sharper picture with crisper sound, than ever before.

Warner Bros. is set to do us all a solid, as they’ll uncork the flick in a DVD/Blu-ray combo pack, and since they’ve forced us to wait so long (that’s probably not the case, but it sounds like a fine reason to me), they’re even including a slick collectible t-shirt exclusive to this particular release.

Maybe it was worth the prolonged wait.

Rumors are moving about that indicate the bonus supplements include a host of commentary from some of the production’s key players, but I’m having some issues confirming any official bonus supplements. We’ll see how that turns out.

Expect this beauty to be made available on October 4th, just in time to relive some old cinematic familiarities come Halloween.

Dig on a look at the cover art and t-shirt design below. And don’t forget, Andrés Muschietti’s big screen rendition of the story will creep into theaters on September 8th, 2017.

Synopsis: In 1960, a group of social outcasts who are bullied by a gang of greasers led by Henry Bowers are also tormented by an evil demon who can shape-shift into a clown and feed on children’s fears and kill them. After defeating the demonic clown as kids, it resurfaces 30 years later and they must finish it off as adults once again. 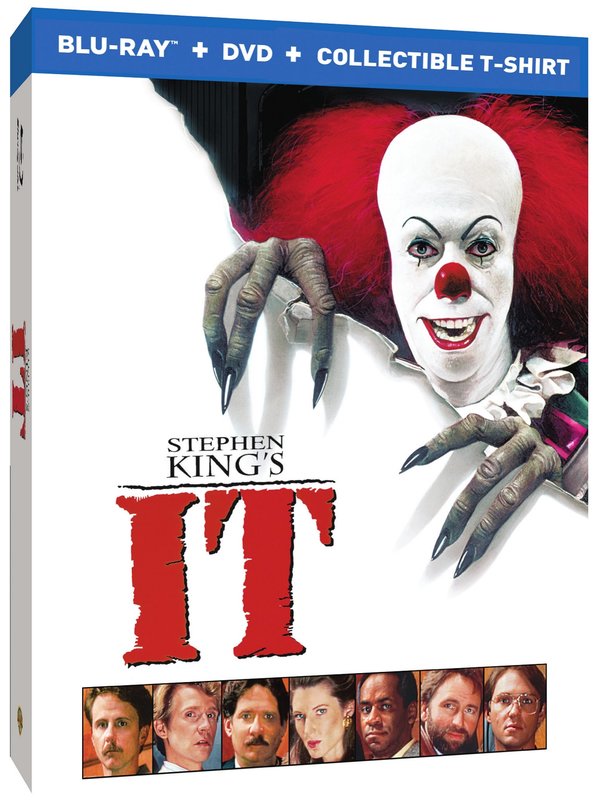