The tides of terror always change. We’ll experience a half decade dominated by J-horror before the subgenre cycles out and makes way for the found footage wave. After the flood of found footage we’ll see the haunted house make a comeback. So on and so forth. Everything moves in a circle, which leaves one to wonder: What comes next? Is there a pattern we can begin to outline?

Objectively speaking, it’s pretty hard to answer those questions. We do know that horror seems to operate on a loop, but with new creations, new patterns form. We don’t know when the found footage subgenre will slow, and we don’t know how long it will take to see the handy-cam return to cinematic prominence after the initial sprint has come to a slow jog. And that’s all because found footage, and every other film style or topic out there is new just once. Only once.

For the most part, “body horror” is one of the newest trends, though we’ve seen sprinkles of the subgenre sporadically surface for decades. Lately, it’s been finding a way to really shine with viewers. I think that’s a direct result of a universal uncertainty of ourselves and a subgenre that opens the door to psychological horror nice and wide. Think about it – self-consciousness and our own personal perceptions of how we look – the two really do go hand in hand together. Two peas in a pod.

There’s an intricate emotional layer to all of us, and whether it is pronounced in one’s personality, or barely detectable, it’s there and we feel it. Psychological films, particularly those that put the physical appearance directly under the spotlight, have the potential to be both terrifying and deeply saddening. There are few things more disconcerting than gazing at a screen, staring at some pathetic excuse of a life, and then realizing the real you – the person watching the film, judging the fictional content – happens to share a great deal of common points with that poor sap on the screen. That’s a rough feeling. And it’s a feeling that Let Her Out successfully exploits time and again.

The story follows an extremely troubled young lady by the name of Helen who’s having something of an identity crisis. Without revealing too much, I’ll say that Helen might actually be a sufferer of the most extreme case of split personality disorder in history. Dangerous to a fault as a result of a distorted mind, Helen becomes a myriad of individuals trapped in a single body, but all of her detectable quirks are relatively minor, so in the end, we still feel as though we’re only dealing with two separate identities. It’s a mind bending movie that closes out on two back-to-back scenes that will absolutely blow your mind.

All around, the cast and crew were terrific. Cody Calahan’s direction and story are both sharp as a new scythe and he manages to pull some terrific work out of a relatively green cast. Alanna LeVierge is terrific fronting the film as the conflicted Helen. The gorgeous Nina Kiri is stellar as Molly and Adam Christie slays as Ed. These are good performers made great by an individual who knew precisely what he wanted from his story, his characters and ultimately, his film as a whole. This group gels well, and any other substitutes in this pic could have potentially caused some damage to the production.

But rest assured, this is no damaged production. It’s just disturbing. Deeply disturbing. Calahan’s finger is on the pulse of contemporary horror and he’s managed to exploit some of our greatest fears (look into Antisocial, as well, as that’s another great example of creating relevant and jarring terror) without venturing into any sketchy roadblocks or encountering unintentionally comedic side effects. The simple fact of the matter is Let Her Out is a spirit breaker of a film, destined to leave you feeling chilled to the bone and out of place in your own skin. You want to see what tangible fear truly looks like? You want to see Let Her Out. 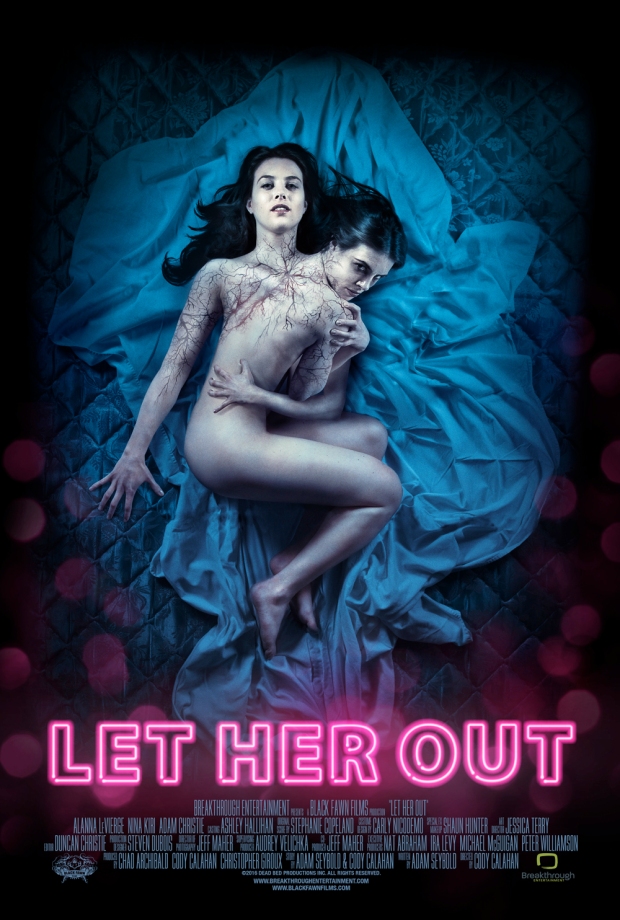