Well, there’s been a lot of talk surrounding the forthcoming Ash vs Evil Dead Season 2. Most of it has centered on the insanity of everything and the fact that virtually everything has been ramped up to 11 for the second season. More blood. More guts. More punchlines. More beautiful women (we hope). More Delta 88 (Bruce Campbell promises history’s gnarliest death scene, and indicates said scene involves the old hot rod). A lot more Deadites, of that there’s no doubt.

There’s even going to be a major, crucial foe introduced.

Who is the major villain of the second season of Ash vs Evil Dead?

None other than Baal, one of the 7 Princes of Hell.

Ash is in deep, come October.

Speaking of October, we wanted to bring you a quick update on the show’s return status. For some time imdb.com had a late September date listed as a season 2 premiere date. Starz has righted that wrong: Ash vs Evil Dead Season 2 premieres on October 2nd.

We’re comfortable with that date. That’ll leave us sitting somewhere near the middle of season 2 when Halloween hits. Halloween and the Evil Dead – of any sort, really – kind of go hand in hand.

Below we’ve got an image of Baal, looking a little pissy, but surprisingly… not very tough. Go figure… 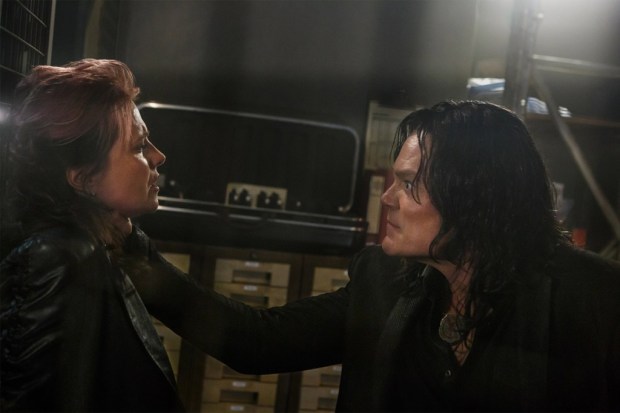 Bruce Campbell returns as the hero we all love, Ash Williams. Ray Santiago, Dana DeLorenzo and Lucy Lawless also return to reprise the roles of Pablo, Kelly and Ruby, respectively.

Check out the red band trailer for season two below, and once again, remember to mark your calendars – October 2nd is the official return of Ash vs Evil Dead!