Eli Cologne is a billionaire who funds a program to send him into space. Once there, he cuts his hand and gets infected with alien organisms. By the time his shuttle crash lands in a swamp, he’s a deformed maniac who eats people. Throw in a colorful cast of characters like Sheriff Ruffman and Deputy Sample, Dr. Munro and her two dumb sidekicks Scientist 1 and Scientist 2, a few hillbillies, and a photographer and models from Bullets and Bimbos magazine, and ol’ Eli has his claws full choosing who to dismember and chomp on first.

The film takes its inspiration from bad sci-fi movies from the ’50s as well as grindhouse movies from the ’70s, which makes for a pretty interesting combination. It’s soooo retro, from the scratched-up film to the music to the cheap practical effects. There are scenes when objects like a space shuttle and a Mars rover are purposefully and blatantly toys, and there’s even a Claymation sequence. Aside from the R-rated language, it could be a movie from Mystery Science Theater 3000. 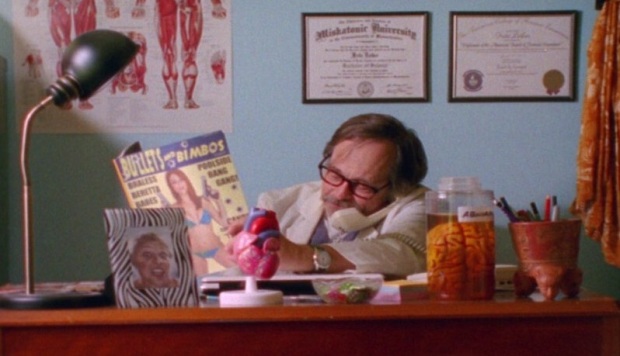 Check out that sweet degree from Miskatonic University in the background

I have a few gripes. It’s slow paced and a bit laggy. The sound isn’t great. It’s amusing, but not laugh-out-loud funny. The acting is either really bad, or done tongue-in-cheek (I think it’s a mix of both, depending on the actor).

That said, it’s still hard to scoff at the movie. Many cast members do other jobs in the film. Kletus the hillbilly is also an assistant; Marcelle Shaneyfelt (Dr. Munro) is also credited with hair and make up and as a Bar Extra; Sam Cobean (Scientist 2) plays the theremin on the soundtrack. Meanwhile the director, Mike T. Lyddon, wears several other hats, including producer, writer, special visual effects, film editor, foley, composer, slide guitar, synthesizers, and voiceovers. I can’t judge the movie too harshly when it’s clear so much loving work went into it. Overall, I found it enjoyable and well worth an hour and 14 minutes. Give it a look if you’re in the mood for something goofy and gory.