I’ve always heard the Psycho sequels were bad, but I’m asking you to give Psycho II another chance!

First thing’s first – I’m not here to talk smack about Psycho. It’s a masterpiece and one of my favorite horror films of all time. I watched it for the first time when I was 10 and it was one of the first genre films that showed me horror can be art. But I had never touched the sequels before. I did watch the shot for shot remake that came out in 1998 and that confused me to no end. And after reading the story Psycho a few years ago, written by Robert Bloch which the film is based on, I decided that I wouldn’t bother with the sequels. Psycho is such a perfect piece, there’s no point in tarnishing my memory.

But today I decided to watch Psycho 2, the sequel that came out in 1983. Blame it on the cold medicine I’m hopped up on, or blame it on Netflix for recommending it to me at just the right time. But I watched it.

And I kind of loved it? Like a lot?

Oh Norman, you’re mad, don’t you know that? You’re mad as a hatter.

Universal decided to make this sequel due to Robert Bloch releasing his own novel sequel, Psycho II. In the novel Bates escaped the sanitarium and is headed to Hollywood to stop a movie that’s being made based on his life and murders. Universal chose director Richard Franklin who was a student of Hitchcock’s and met with him on several occasions to direct their version of a sequel. Franklin had also directed a film called Roadgames which was very much a love letter to the classic Hitchock film Rear Window. Tom Holland wrote the screenplay for Psycho II and took months to write it. The assistant director of the original Psycho, Hilton A. Green, was also contacted to come on as a producer but he was nervous. It wasn’t until he spoke to Patricia Hitchcock, the daughter of the famed director, who gave her blessing after reading the script, that Green signed on. Anthony Perkins was of course contacted but was hesitant at first so it’s rumored they had Christopher Walken as a backup. But after Perkins read the script he signed on because he felt like it was really Norman’s story.

Anthony Perkins slips back into Norman Bates like a comfortable old suit and that helps a lot with this film. His slow break back into insanity is fascinating to watch and he pulls it off perfectly by his delivery of lines and these interesting quivers in his voice. This is a very layered version of Bates that’s more in depth and rich than the first film. There’s a particular scene where Norman has invited Mary to stay at his motel and he instinctively reaches for the Room 1 key only to change his mind at the last minute and grab a different room. It’s only a few seconds and his back is turned to the camera, but you can perfectly read the struggle and internal battle. 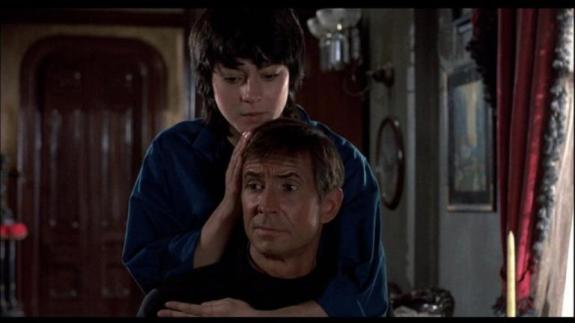 So what exactly is the story in Psycho II?

Norman is released from the sanitarium after 22 years, being declared “restored to sanity”, he’s returned to his home and motel, and given a job as a busboy at a local diner. But Lila Loomis, Marion Crane’s sister, is livid that this murderer has been released. And so Norman must begin to get his life back together and control his sanity, but people around him are starting to die, and he can’t trust his own brain.

Psycho II relies on the lore of the original film and treats it like an urban legend within the story which allows Psycho II to succeed – Psycho II is Norman confronting his demons.

This sequel plays on the constant question of whether Norman is really cured or not and the film continuously keeps you guessing with little twists and turns and reveals. Is Norman imagining all this stuff? Or is he just a victim of his surroundings? You find yourself much more enchanted by Bates in this film and you’ll find yourself quickly rooting for him and with the final reveal you leave the film feeling so conflicted about your own emotions. It’s also an interesting piece on what happens when killers are rehabilitated and sent back out into the world. While they may have healed and moved on, the consequences of their actions are still in the environment and others are still unable to move on.

And while this sequel is so original in its’ ideas, it also does a wonderful job of dropping little Easter eggs and nods at the previous film. While Psycho II isn’t as scary as the original, the murders are a lot more violent and emotional.

So I urge you to take another look at Psycho II or watch it for the first time if you haven’t yet and go in with an open mind. All I’d ever heard about the Psycho sequels was that they were awful and pointless, and insulting to the original. But that is not the vibe I got at all. Of course, I haven’t watched the rest yet. And hey, if Tarantino can go on record saying that he prefers the sequel to the original, I think we can go on record and say it’s not that bad. I mean…Tarantino needs to chill out a bit, Psycho still remains 1000 times better, but maybe he’s just gone a little mad…