Obsessed with the Zodiac Killer? Just can’t get enough of one of America’s most puzzling serial killer cases? Well, we’ve got good news for you: AGFA and MVD have you covered with a killer restored Blu-ray of The Zodiac Killer, which will be available on July 25th!

Here’s some valuable 411 from the official press release:

AGFA (American Genre Film Archive), a non-profit that preserves the legacy of genre films, is pleased to announce details for THE ZODIAC KILLER Blu-ray, which will be released on July 25! This is the first title of dozens in our collaboration with Something Weird Video following a successful 2015 Kickstarter campaign.

Directed by Tom Hanson, who had previously owned a chain of Pizza Man restaurants, THE ZODIAC KILLER was made to capture the real-life Zodiac Killer. That plan didn’t work. Instead, we got the most outrageous and compelling “tabloid horror” vortex in the history of planet Earth. And beyond. During theatrical screenings, Hanson constructed in-theater “traps” to lure the killer from hiding. These included the use of an ice cream freezer filled with rent-a-cops and a raffle with a motorcycle as a prize. You won’t get insight like this by watching a David Fincher movie. But you will get it while watching THE ZODIAC KILLER.

You can pre-order the Blu-ray right here. 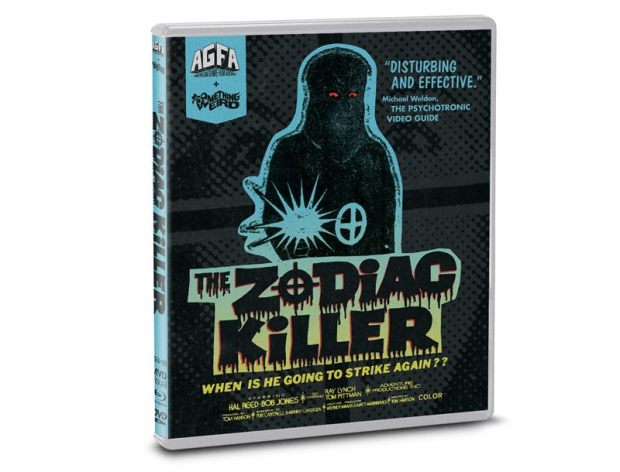