Hall (Kilmer), a “bargain basement Stephen King” best known for his books about witches, is on a book tour. He’s currently stopped in a small town infamous for the time a priest went crazy and killed twelve children. Hall and the overeager Sheriff LaGrange (Dern) see a book idea and decide to collaborate (so I guess Hall is done with his book tour?) on a book about vampires. Hall’s wife Denise (Whalley) and his agent (David Paymer) are on him about money and a great outline, respectively, so the pressure is on to produce a bestseller. Hall’s dreams get increasingly strange and intense, with visits from his good buddy Edgar Allen Poe (Chaplin) to visions about vampire girl V (Fanning).

First, my gripes. While the premise is inarguably original, the comic relief gets tiresome, as do the dream sequences. I get that Hall is ‘twixt the two realms, but the dream sequences are unwelcomingly frequent. There are also a lot of loose ends that don’t really have much bearing on the movie, like Hall’s deceased teenage daughter and his drinking problems. The movie jumps from point to point without really resolving much in general—I guess like a dream. After a while Kilmer loses his ability to act, and even Fanning, a child, outshines him. 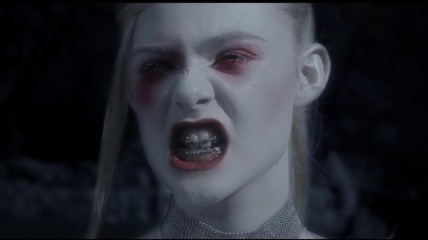 It ends abruptly and confusingly, and then the final insult: an end credits song (according to IMDB) performed by Kilmer and Coppola.

I did find some things to like—it’s not a terrible movie. As an ’80s baby, I grew up watching the movie Willow, and the reunion of Sorsha and Madmartigan is delicious. The comic relief is occasionally funny. The movie looks gorgeous, especially the damn dream sequences. The cast is great. All in all, I wasn’t sorry I’d watched it—once. Give it a look if you’re in the mood for something light (at least in tone) and entertaining but with vampires.