Beth’s having trouble with her sleep cycle. She wakes in the wee hours, but she can’t move a muscle. Even worse, she can feel that someone – some invisible presence – is strangling her. In the earlier portions of the film she’s able to snap to and get to moving. But what happens when she doesn’t snap out of it in time? Can she be killed in a dream or some form of strange transference state, leading to death in life?

What happens when the terrors of her nights intensify to such a degree that she is entirely incapable of escaping.

Perhaps a better (potentially less spoiler laden) question might be what happens when her twin sister, Kate is drawn into this – quite literal – nightmare?

It’s a trippy flick, with a lot to think about, especially upon a single viewing. Fortunately, there’s no need to be a technical genius to follow the tale. For as complex as it is, it’s fairly straight forward when the layers are peeled back.

I’ve got answers, but I’m not a spoiler unless I truly believe that I might save you a few bucks in preventing a dreadful purchase. I’ll defecate on a movie that I feel blatantly insults the audience. But that’s about where that ends. Where Kate’s story begins, is where the more visceral sequences take to life. It’s where the emotions begin to boil. The film undergoes a slight adjustment in scope size, but it’s played without panache, so that the transition and shift of growth and evolution feel organic as opposed to forced. It’s a rather wise technique from director, Phillip Guzman, who shoots like a man with twice his experience. 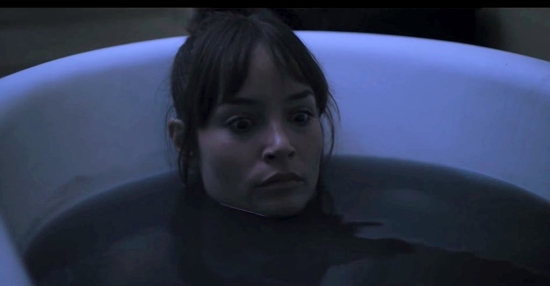 This is an excellent addition to the genre. Jocelin Donahue and Jesse Bradford are terrific together. They both look sad, and frightened, desperate but not broken. And those are accurate responses to such a situation. It’s hard not to like these two. And there cannot be enough love hurled in the direction of the production crew. This is a really crisp piece of work that yet again reminds us great minds and callused hands can make a beautiful film without an army of Brinks trucks in tow.

Now having said all that, there are just a few minor complaints on my end. There are a small number of vocal exchanges that border on hokey, and it doesn’t help too much when half of those lines come out of Lori Petty’s mouth. She’s a fine actress, but she needs comedy in her work to shine; playing a dead-serious character backfires on her a bit. I can also spot some outside influences make their way into the film on more than a few occasions. It’s not uncommon, but I can’t help but to appreciate original material and innovative techniques just a tad more.

Entirely original or not, Dead Awake is a no-nonsense, sleep-disturbing film that’s more likely to draw nods of respect than storms of boos. If you can bite on a solid science fiction film with heavy sprinkles of pure horror, you can certainly chew on the chills of Dead Awake.