Scottish movie. James is an English teacher whose humdrum life is interrupted by the death of his mother, which leaves him heir to the estate home he grew up in. Despite his mother’s warning that “You must never go there,” he pretty much runs straight over. He feels the need to confront his childhood demons, namely Owlman, whom he was so terrified of in his youth that he tried to drown himself. Once there, he meets the caretaker, Evie. Though he’s distracted by her charms, the Owlman isn’t done with him yet.

I was first drawn to the movie by the title alone. I should mention this is a special edition of the movie, an updated version of a 2013 film, originally called The Owlman. The re-titling is apparently just one in a series of improvements on the movie. (Never seen The Owlman, so I couldn’t tell ya.) I was skeptical about a movie with the antagonist being basically Slenderman with an owl head. Owls are adorable!

But holy shit that is one scary fucking dude. His looks alone are horrifying (did I mention his gnarly talons?), but his contemptuous monologues to James are pretty damn unnerving, too. 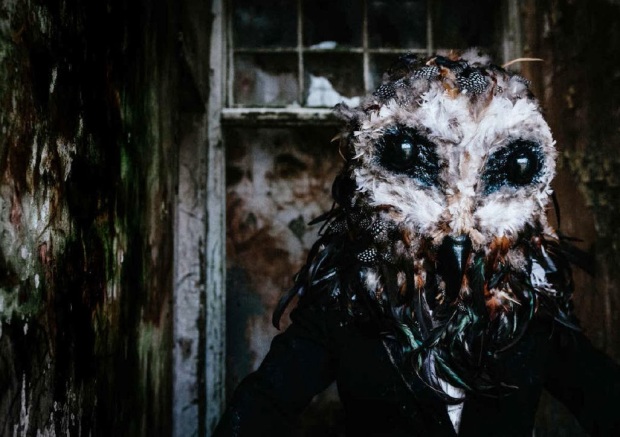 Aw, look at those soulful eyes

The twists the plot takes are disturbing as well, and don’t get me started on James’s nightmares.

The performances are memorable. Euan Douglas as James is terrific and David Schofield as Owlman is terrifying. Lexy Hulme as Evie really steals the show, though. The sets are marvelous—the Scottish countryside is breathtaking, and James’s estate is a character of its own. It towers over the people inside and multiple shots of the interior suggest bars, despite the many large windows; it’s huge, but has a suffocating feel at the same time. The score is also great; it ranges from pretty vocalizations to ominous piano to what sounds like a music box.

The movie has a dark brooding tone, both in cinematography (it’s always cloudy) and themes. It ponders mortality and the inevitability of death. It discusses the futility of denial and running away from guilt. It’s beautiful, it’s thought-provoking, and it’s creepy as hell. Watch it.