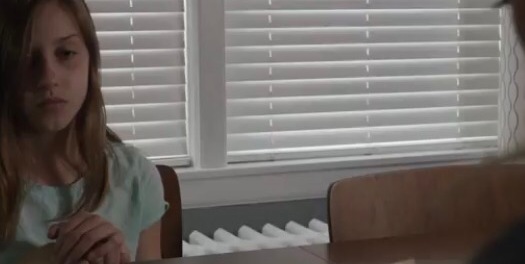 A woman is visited by a strange girl bearing a letter with the instruction that she let the courier stay while she reads it. The letter conveys the tale of a man on death row for killing his family because a demon told him to. The woman is drawn in to the story in ways she can’t imagine.

I found this little gem on Reddit with the description “My daughter and I made a /nosleep story into a creepy short film.”

The performances are pretty good. The woman who plays the main character and the man who plays her husband don’t quite come across as believable when they’re talking; they sound like they’re definitely reciting a script. The man who plays the inmate is much better, but his southern accent is overdone. The girl who plays the courier acts circles around the adults. She says nothing, but her hollow-eyed stare is impressive.

It’s ten minutes long, but the story wraps up neatly with a sweet little twist. The makeup and special effects are great, and the sets look good. The camerawork and editing are professional quality. The writer (who’s a little girl, mind you) does a masterful job building tension and leading up to the final scare. Even the end credits are cool, with creepy pictures overlaid by moody music written by the director.

Check it out if you’re in the mood for something short that packs a punch.