We’re all excited to see Harrison Smith’s upcoming mega movie, Death House, or, The Expendables of Horror, as the film’s been branded. It’s a production loaded with a who’s who of horror stars, and that’s more than enough to have our eyes and ears glued to the production. But things have been relatively quiet over the last few months, so we wanted to track director Harrison Smith down in hopes of being brought up to speed on the release of the film. Check out what Harrison had to say about the picture’s release and the absence of the great Robert Englund! 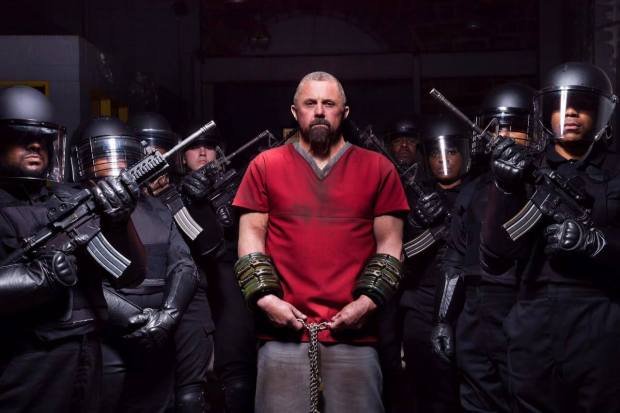 Addicted To Horror Movies: How excited are you to see Death House premiere at this year’s Scare-A-Con?

Harrison Smith: I was very excited because ti was the con where it all started. I met Gunnar there 2 years ago and it’s where we sat down and went over what he wanted to keep in the film from his original script. It’s a well-run convention and a number of our stars were there, so it all fell into place.

ATHM: Do you have any idea when the film will be available to the masses, and will we see a VOD rollout initially, or will this one hit digital  outlets as well as discs, simultaneously?

HS: This is being done now with the distributor and producers, Rick Finkelstein and Steven Chase. We are getting a theatrical. The number of screens, etc. will be determined soon. So hang tight on the all platform release as well. This film needs proper marketing to the right audience and not just doing a shotgun style release.

ATHM: When you’re working with a large group of performers who are accustomed to being longtime alpha figures, do you ever feel a bit intimidated?

HS: Not at all. These were very accessible, kind and generous people. If anything, I learned so much from them and their experience in the industry.

ATHM: The list of genre favorites appearing in the film is absolutely amazing.  How were you able to recruit all these genre faithfuls for one single film?

HS: I did not do that. That was the work of Gunnar’s agent, Mike Eisenstadt and Gunnar himself. They approached these names over five years ago, so much of that was already in place by the time I came along.

ATHM: Given so many alphas in one production, did tempers ever flare while on set?

HS: Not once. It was one of the most pleasant shoots I ever worked on. A real pleasure.

ATHM: I notice that Robert Englund is not featured in the film (according to imdb, of course), was there a scheduling conflict there, or was Robert  simply not a part of the film’s plans?

HS: Robert’s schedule was the issue, but feel free to reach out to him on this question. He was always part of the film’s plans and he even gave a letter of intent. When the money fell into place, some of these iconic actors were committed to other ventures.