Every Sunday I head to my local library which is a beautiful stone building shaped like the Pantheon. It has five floors of glorious books and various strange rooms and a basement I still haven’t gotten access to yet. I’ve gotten lost in its’ twisting shelves more than once. Legitimately lost. One time I had to call my Mom. The first time it happened I stumbled into a dark room filled with old Mac computers from floor to ceiling. I’ve never been able to find it again. And one time I found an entire section in the darkest corner of the top floor filled with old spell books. Yet I’ve never been able to find it again. Seriously. This library is magical.

But most importantly this library has a huge selection of books and while they don’t have a specific horror section (I’m working on getting them to create one) they have a really amazing selection of them littered throughout their fiction section. My favorite thing to do is to pick a random letter of the alphabet, go to the shelves and just dig through finding horror gems.

We all love Stephen King, we all know Dean Koontz and Thomas Harris and William Peter Blatty but there’s so much horror fiction out there that’s ignored or untouched or just not getting the recognition it deserves.

So, what I want to do is share some of the random finds I’ve read lately because I’m on a good run here and hopefully you’ll find a book you haven’t read yet and introduce yourself to a new author!

I picked this one thinking it would be just another quick thriller read – serial killer stalking girls, cop on the hunt, that sort of thing. But it turned out to be a fascinating change of the genre, and a quick read because I couldn’t put it down!

This story is from the perspective of the killer, and while he remains nameless throughout the story you learn to completely understand this man and actually root for him. It’s one of those American Psycho, The Boy, Behind the Mask situations. We’re introduced immediately to Sarah, an 18-year-old girl, who’s brief appearance and subsequent murder sets off a string of events that guide us throughout this whole story. A friend of Sarah is kidnapped by our killer at the time of Sarah’s murder and is held hostage in his basement. Their dynamic quickly forms into a confusing and sometimes hilarious victim/captor situation. Two more women come into play creating some sort of messy, funny, love triangle all while this serial killer struggles to maintain composure and a hold of the situation.

The back story of our nameless story teller feels rushed though unfortunately and there could’ve been more time spent diving into that sad past. We’re given just enough to start to understand why he is the way he is, and what led him to do what he’s doing, but it isn’t enough. But that would really be my only complaint!

It’s a morbid and hilarious tale that is a strong first novel for Graeme Cameron, written in 2015. I can’t wait for what he has coming next which is apparently a second book in this series.

It’s currently holding a 3 ½ star rating on Goodreads but I rated it a strong 4/5.

This is one of those amazing atmospheric novels where you’re completely lost in the description and the characters. Set in 1507 in the middle of the longest, coldest winter in a small German town, our narrator is one of the oldest women in the village. She shares with us as a priest visits the town only to tell them they’ve been cursed by a witch. And so, begins a terrifying witch hunt, and all fingers are pointed at the old women of the village.

Erika Mailman’s writing is so beautiful and I found myself shivering in the warmth of my apartment as I read this chilling story. Güde is the perfect narrator to this story, you trust her completely even though perhaps you shouldn’t. And all the characters that form around her are equally as fascinating and deep. It’s just so refreshing to have an older woman as our lead.

This story also has a surprising amount of gore involved with some pretty horrific stake burning scenes. And while the ending is satisfying, it leaves just enough up to the imagination.

Erika published two first novels in 2007 and this was one of them. The second was a story about a Gold Rush prostitute called Woman of Ill Fame. This October she has a book coming out about Lizzie Borden which I’m pretty excited for. Her inspiration behind Witch’s Trinity was when she found out she was related to a real accused witch, Mary Bliss Parsons. At the end of the novel she inputs an author’s note that explains all about it and it’s really cool.

Overall, The Witch’s Trinity is a beautiful and dark period piece that is elegantly written and haunting. Goodreads rates it at 3.5/5 starts but I give it a solid 5/5. Highly recommended!

Ronald Malfi is quickly becoming one of my favorites in the horror genre. I picked up The Narrows on a complete whim and am currently reading The Ascent which is even better so far. He’s written 14 novels in total and shows no signs of stopping. The Narrows was published in 2012 and is a really interesting take on the vampire sub-genre aka it reads like a vampire novel but isn’t really….but kind of is….it’s hard to explain. JUST READ IT.

Basically, in a small mountain town cattle start showing up dead, their brains eaten and their skulls smashed. The Deputy Sherriff in town is left to investigate these strange occurrences and as small children around the town start to disappear he realizes he’s in over his head. Malfi is a king of connecting various complicated story lines but making them easy to understand and addicting to read. His characters are so realistic and fascinating. That man’s imagination is so wonderful.

I feel embarrassed that after reading SO many horror novels in my life, I’ve only now discovered Ronald Malfi. While I do recommend The Narrows, I also recommend picking up any of his books – I know I’ll be devouring his entire catalogue.

Oh, Grady Hendrix, how I love you! He’s a newbie in the horror genre but he’s come running out of the gate at full steam. He has the most wonderful ideas and brings them to life with amazing characters and some terrifying elements.

Horrorstör is set in an Ikea rip-off store which is built on top of an old prison grounds. The employees that work there are like drones, living that awful retail world that we all must do in our lives (I gave it 5 years and it was hell). One night, two employees are asked to stay late to investigate the strange occurrences that have been happening in the store. But after two more employees sneak in to do some ghost hunting, the store explodes with terrifying paranormal activity.

The book itself is amazing – it’s created to look like an IKEA catalogue, complete with coupons, furniture advertisements and furniture prices. It’s really fun to read and you have to really look at every page to catch all the little horror nods and jokes.

This one is a very quick read but fascinating as it develops into a ghostly, violent night. It reminds me a lot of Thirteen Ghosts mixed with House on Haunted Hill.

Grady Hendrix has written four novels in total and a cookbook with his wife. He’s a powerhouse and I can’t wait until his next novel comes out!

Goodreads gives this a 4/5 but I give it a strong 5/5. There is some real gross out scenes in this book I could barely get through and it was AWESOME. 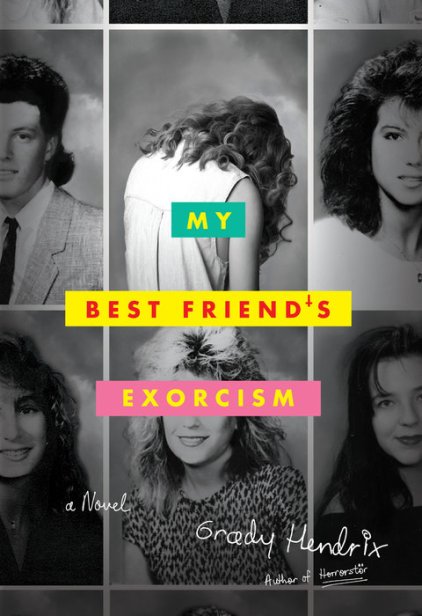 And speaking of Mr. Hendrix, the last book on my list is his most recent novel; My Best Friend’s Exorcism. You may recognize this cover from bookstores because it is one of the best covers I’ve ever seen! The paperback will be released on July 11th and it is EVEN better. I’ll be picking it up even though I already own the hardback edition because this guy knows horror and what we love best.

Set in the 80’s this story is all about Abby and Gretchen who have been best friends since they were young. But when they hit high school, Gretchen begins to change after a strange night in the woods. Abby seems to be the only one who knows something is wrong, but Gretchen is pushing her away.

The first half of this novel sets the scene whereas the second half explodes into some crazy shit. There’s one particular scene with a tape worm that I could barely get through. Not since The Exorcist has an exorcism been pulled off so well in novel form. Hendrix is an incredibly strong writer and surprisingly writes teenage girls very realistically.

The pop culture element is amazing, the fashion is amazing, and the horror is astounding. Pick this bad boy up right away!

Goodreads rated it a 4/5 and I agree with that. I do wish the horror elements had kicked in sooner just because they were so deliciously evil.

So, that’s it! My current horror fiction recommendations. Got some of your own? Please leave a comment, I read about 3-4 books a week and it’s about 90% horror so I’m always thirsting for more horror novels and authors.