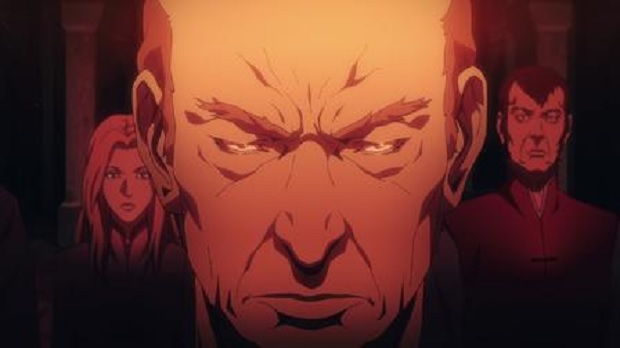 The talent behind this series is admirable to say the least. A sizable team of skilled artists bring the story to stimulating life, and the living legend known as Warren Ellis (a hero to comic fans around the globe) assembles an engrossing story that just about guarantees you won’t rise from the couch until the first season has wrapped. And Netflix, to their credit, have done a really solid job of promoting the project, which should hopefully lead to strong early numbers.

But enough gushing over the talent, let’s get into the story…

Right off the bat we’re treated to some beautiful manga-inspired artwork. The colors are vibrant, and the darkness is chilling. It’s the exact kind of tone one would hope for from a Castlevania series. And fortunately things continue to ride the crest of an engaging wave.

Lisa is considered a witch by locals, and she’s been shunned, so she does the rational thing and heads to Vlad Tepes’ sprawling mansion. She meets the count, and while he could easily turn her into a feast, he instead listens to her and finds her idea of creating advanced medicine, with Vlad’s assistance, to be rather humorous. Just the same, there’s a romantic spark between these two, and we soon learn that the two, at some point, become wed.

Fast forward and we’re looking at a small community not only chastising Lisa, but burning her alive, their claims, of course, are that she is a practicing witch. She screams as she burns alive, and pleads with an unknown presence to show mercy on the townsfolk.

We know that isn’t all too likely. We also now have a major conflict established. Vlad will no doubt want revenge on those who have burned his wife alive.

Surprisingly, Vlad extends the church members and those in the community one year to make their peace and essentially disappear. We soon learn that Dracula has a plan, which is why he extended the locals a year – he’s going to build an army of vampires to obliterate the village. But he may have someone standing in the way of making that nightmare (which feels completely deserved) a reality.

As it just so happens, Vlad lives up to his promise, creating an army of vampires, and one year to the evening, he unleashes his beasts on the locals and it is an absolute bloodbath.

Those jokers probably shouldn’t have burned the man’s wife alive. 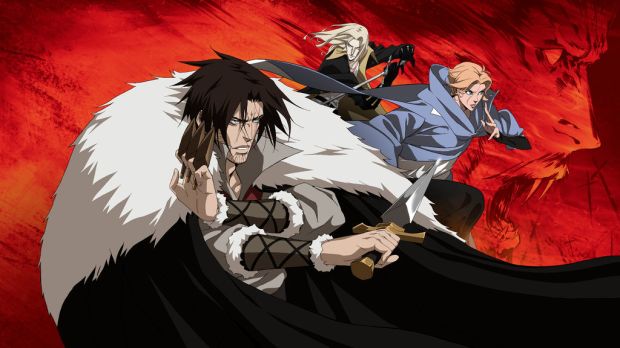 The second episode introduces us to Trevor Belmont, who’s drunk in a tavern with a lot of hostiles that jump to accuse Belmont of devil dabbling and interacting with monsters. We of course know the Belmont clan to be opposition to Dracula. Given his entity we know this to be a truth. For the clowns in the pub, well, they’re not going to learn anything other than what a solid beating feels like.

It turns out that Belmont is basically just a traveler. His family name isn’t a popular one, and he doesn’t seem to have many folks to call friends, either. It seems perfect that Trevor and Dracula would become arch rivals. Trevor doesn’t exactly have much to do, and while he isn’t treated too wonderfully, he doesn’t want to see thousands of humans wiped out, either.

Belmont eventually makes it to another village. It’s evident that Dracula’s monsters have already torn the place to shreds, but Belmont manages to find people all the same. And apparently, where there’re people, there’s violence for Belmont. Of course, he has no trouble in whipping (intentional, yes) a few evil priests.

Belmont soon makes some allies and that proves, at the very least, a bit informative. Trevor learns the town that he’s headed for is already in bloody ruins. So where is Trevor left to venture? Does he take a stand and attempt to end the slaughtering by taking out Dracula himself?

Either way, Belmont is recruited by a few of his new associates, who need a task performed. There’s a child missing, and they want Belmont to retrieve this child. Our antihero, again, a little on the bored side, decides that’s a gig he’ll take part in. 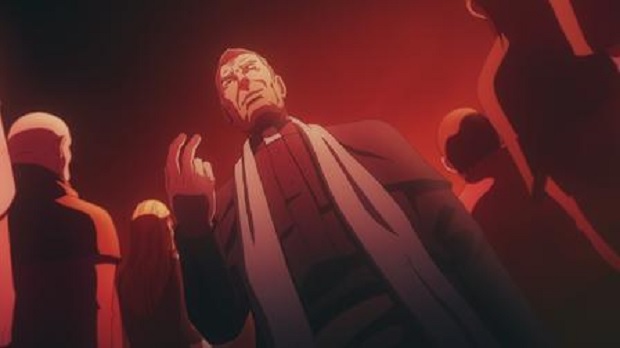 The third episode in the first season sees Belmont heading for subterranean depths, where the child he has agreed to find and bring to the surface has been trapped. It just so happens that living beneath ground doesn’t look so terrible… well, outside of the giant cyclops that Trevor must fight.

This is one of the coolest scenes we’ve witnessed yet. It feels like the equivalent of an encounter with a boss in one of the various game titles. Except, it’s much more epic in cinematic delivery, and Belmont casual demeanor just makes it all the cooler.

We come to learn that the underground realm could very well be the place that Dracula now calls home. If that’s the case Belmont will go cave diving again soon. If it’s not the case, Belmont will no doubt run into more terror very soon.

Before he has the chance to make any serious decisions, the lovely church officials who enjoy executing innocent human beings find and surround Belmont, all with weapons drawn. He’s taken to the local church, where one of the head honchos of the cloth (the same man who ordered that Dracula’s wife be burned alive) reveals himself to be every bit the scumbag as his cronies.

The religious may want to steer clear of this series. The church is taking lefts and rights like a defenseless boxer. They’re deluded and vile, which is a nasty combination.

The people remaining in this battered community may want to steer clear of the church as well. That bastard bishop plans to eradicate every living member of this group by nightfall. Of course, Trevor inevitably finds himself in the middle of the madness and danger.

Trevor manages to warn the decent humans who still breathe, and they work on developing some plan of counter attack. Of course, the people again look to Belmont as a leader, but he’s pleased getting out of dodge before nightfall. Lord knows the man hopes to have many drinks beyond this particular night.

The mob mentality is on full display in the series, and between the vampires and the crazed men of the church, it’s difficult in identifying the greatest threat. It seems everyone wants to kill everyone else. Talk about monsters of all sort eating away at themselves from the inside.

Without giving too much away, I’ll say this: Episode three ends with all out warfare. Who survives and who perishes is irrelevant, the destruction is beginning to really pile up, and it’s great to see. There hasn’t been so much as a moment that I’ve been disappointed with this series, thus far.

Here’s to hoping viewers can dig this animated rendition of a truly classic franchise, because even now, before the first season has wrapped, I’m wanting more than what I’ve got left. 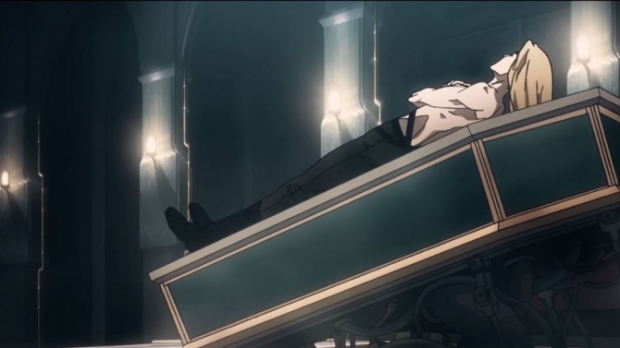 Now, given the fact that this is the final episode of the first season (which feels more like a mini-series than a season), I’m not going to provide you with a step-by-step recap. This is Netflix’s grand finale, and their bid to ensure their first season is entertaining, and adored enough to inspire a second season.

For my buck, the show is top notch. The legendary Warren Ellis has written a terrific script that manufactures tension, anticipation, excitement and dread. The series isn’t particularly frightening, but for a video game adaptation it is nothing short of truly exceptional.

The season finale is grim in message, but it’s exciting as hell, right out of the gate. The action never lulls, and the characters – at this point – have become clearly defined and likable. Ellis and the gang at Netflix have taken this story to heights that far exceeded my personal expectations.

Word is Netflix has already ok’d a season two. If we’re really lucky, we’ll get at least eight episodes of this magnetic little treat. I shouldn’t be surprised in saying this, but it looks like Netflix may have another serious hit on their hands. Couple Castlevania with Trollhunters and even older crowds are going to be forced to admit that Netflix knows exactly how to make animation amazing.

Sorry for the lack of details in regard to this season’s climax (there’s an awesome surprise twist in waiting!), but after you binge this one (which requires less than two hours’ time), and you hit home stretch, you’ll thank me for not spoiling a pretty bad ass closing chapter (that certainly leaves the door open for that second season).