I know I’m a bit late to the ‘Night Terrors’ party; there’s been buzz around it for the last year.

In case ya haven’t heard, ‘Night Terrors’ is an augmented reality phone app that works a little like ‘Pokemon Go’ (remember that?); you point your camera, and stuff appears. As its creators put it, it’s an “ultra immersive gaming experience that transforms your environment into a terrifying hellscape.” Or at least it will, when the game is done.

See, it’s still in production, according to its Indiegogo page. At last update, the distributor, Novum, reported, “We’ve been hammering out bugs […] We’ve added some new visuals, some new sounds and content, moved the app to free for a limited time, and feel like we’re (finally) moving in the right direction. […] We’re going as fast as humanly possible.” The Indiegogo page also shows that the game has raised 2/3 of the $70,000 Novum was asking for, with over 2,000 backers.

The completed game, according to Blumhouse.com, will utilize “the phone’s accelerometer, camera, flash, microphone, gyroscope, and GPS to make an accurate map of your house as you play. This means the ‘augmented’ haunted house in the game is accurate to your real crib […] NIGHT TERRORS takes full advantage of all aspects of your phone, which means in-game text messages, phone calls, the app controlling your flashlight, and who knows what else.”

What I played on my phone is a free demo. A demo which made me yearn for a completed game, because the creators have worked hard to make a realistic, scary experience.

I was instructed to turn off my lights. 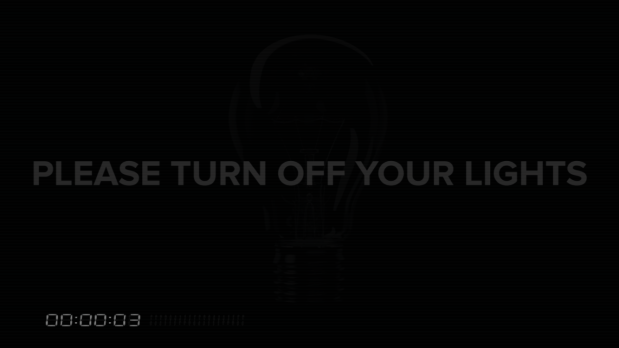 I was duly cautioned not to trip over shit (Novum has made it completely clear that they are not responsible for anyone’s dumb self getting hurt). 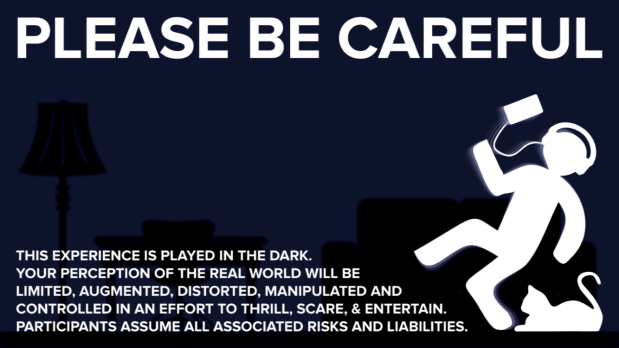 Watch out for your asshole cat!

Well I’m glad I have permission to quit any time

After that, the object is to wander around in the dark, anticipating.

The first time I tried the game, my husband was right beside me, and it was more exciting than scary. We had a good laugh. Tonight I was home alone and tried using headphones, which is how the app is intended.

I don’t scare easily, but holy shit the headphones make such a difference! There are weird ambient sounds and then what sounds like lightning and combined with the screen flashing and distorting, it’s a whole nother experience. With only the light from my phone’s flashlight to go by, anything seemed possible. And the trailer only makes the completed game more irresistible:

I will be first in line to plunk down $5.99 if this bloody thing ever gets finished.