I recently posted an article about scary songs in un-scary movies. This one will be the opposite–downright silly songs in otherwise effective movies.

The movie: A gang of teenage vampires try to recruit a new member in Michael, who unknowingly drinks blood, thus starting the process of becoming a creature of the night. He, along with vampire hunting brothers and his own brother, fight back with all they have.

The song: Some critics maintain that there’s a lot of gay subtext in the movie, like Michael’s brother having a poster of Rob Lowe on his wall. Then there’s this guy: 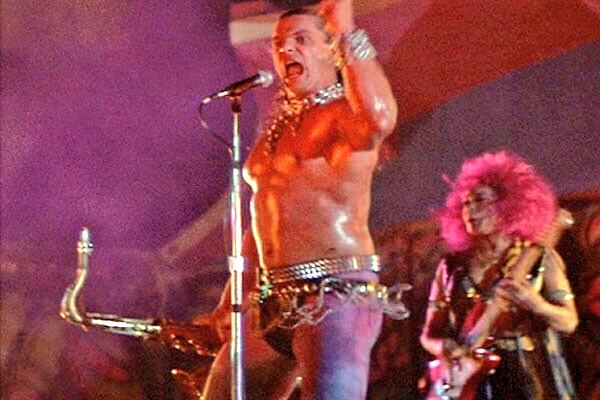 Topless, sweaty, chiseled saxophone guy, who doesn’t really serve much of a purpose in the movie. Michael and partial vampire Star make goo-goo eyes at each other in the audience, and we have another song for the soundtrack.

The movie: I don’t think I really need to synopsize, but here it is. A pair of teens run around trying to get someone to help them fight a big blob that melts and digests everything it touches.

The song: It’s a late-50s theme song for a movie about the blob. Of course it’s wacky! “Beware of the blob it creeps and leaps and glides and slides across the floor right through the door and all around the wall a splotch a blotch” well, you get the idea. Be careful of the blob. 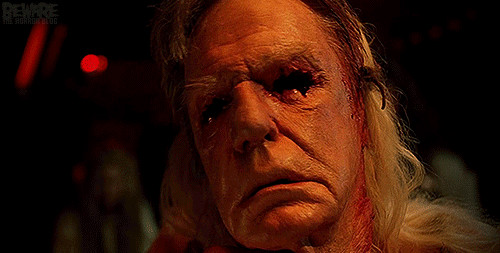 The movie: A group of four teens go looking for odd attractions for a book they’re writing. Unfortunately they come across the Firefly family, who would sure like to butcher them.

The song: I’m not really big on songs that explain exactly what’s happening in the movie. The lyrics are less full of depth than I come to expect from Zombie, and the chorus is relied on way too much. I don’t what it is about the line “Her mama said ‘Come feed desire'” that rubs me the wrong way, but it just does. Overall the song is less catchy than much of his other stuff, and it seems hastily written.

The movie: A group of friends touring haunted houses around the country find more than they bargained for when they are targeted by the residents of the ultimate haunt.

The song: The song is used twice in the film, once when the main characters are menaced by a dude in a terrifying clown mask. The mask tends to overshadow the song.

The second time is when one character is trapped in a room with a record of the song playing. It’s a seriously creepy scene, and this time the song adds to the atmosphere. The lyrics are creepy: “Ghostly things are gonna happen.” “Halloween spooks outside my window/ Halloween spooks behind the trees/ I wish that the children could see/ But I can’t find them for the life of me/ And there’s Halloween spooks outside my windowpane.” But when you listen to the whole thing outside of a scary movie, it loses its creepiness in a hurry. The three singers make the weirdest noises. One sounds like he’s motorboating someone, one sounds like she’s trying to imitate a sheep, and one sounds like he’s doing an impression of Katherine Hepburn.

The movie: A pair of siblings are on the run from a ghastly creature that is planning to kidnap and eat one of them.

And the reason is if you listen to the song in entirety, it becomes un-scary in a hurry. Mr. Hall’s instructions for avoiding the bogey man get more WTF as the song goes on. It opens creepily enough: “Children, have you ever met the bogey man before?” And the chorus: “Hush, hush, hush/ Here comes the bogey man/ Don’t let him come too close to you/ He’ll catch you if he can.” But the meat of the song is gibberish. The following are only a few examples:

“Just pretend that you’re a crocodile/ And you will find that bogey man will run away a mile.”

“Say ‘buzz buzz’ just like the wasp that stings/ Bogey man will think you are an elephant with wings.”

“Sing this tune you children one and all/ Bogey man will run away he’ll think it’s Henry Hall.”

“Just pretend your teddy bear’s a dog/ Then shout out ‘Fetch him, Teddy’/ And he’ll hop off like a frog.”

So the next time you’re scared by a movie, don’t forget to say buzz buzz, you crazy elephant with wings.