This week we started meeting each others’ characters. We have Ruby, a 34-year-old English woman occultist with red hair and green eyes and an appearance that is purposefully mannish. She is played by my wife Lois Kennedy. Then we have John, a 43- year-old Irish gambler by trade; he is a heavyset brown haired man with brown eyes played by my friend who wishes to remain anonymous. Then we have Wilhelm, a 22- year-old muscular German ex-soldier with black hair and brown eyes and is played by my friend Will. Then we have myself playing Robert, a 63-year-old British professor of archaeology with black graying hair and hazel eyes. I am also playing the role of keeper.

Ruby had heard from the school bulletin board where she worked about a lecture called the “Challenger Lecture.” This particular lecture was to be on the paranormal; this gave her some extreme interest, so she decided to get a hold of an invitation. Wilhelm was invited by a close friend of his who taught him to speak English, one Dr. J.A. Smith. Robert was also invited by the same man; the two of them had worked together extensively translating ancient languages and had become fairly close. John had won the ticket in a game of Mah Jongg, and though he had no interest in the topic went for the free meal and drinks. The speaker of the lecture was Dr. Julius Arthur Smith, a droll man with a heavy mustache and even heavier smell of obsidian-hued Balkan Sobranje tobacco. Smith droned on about “hauntings,” He elaborated by saying, “I say ‘haunting’ and not ‘spirit’ or ‘ghost’ because alone of such epiphenomena, haunters can be lanterns, coaches-and-fours, swords and so on.” He goes on with slides and evidence to support his theories. Ruby is open-mouthed on the edge of her seat in awe at all this information while Robert is mainly intrigued due to the historical impact of his discovery. John and Wilhelm are both bored.

After the lecture is over the four characters as well the rest of the people in the lecture go out to eat the dinner that was offered. Dr. Smith goes person to person asking what they thought. Wilhelm told him he didn’t understand much of it but wanted him to explain…and he failed to understand yet again. Politely excusing himself, Smith moves to the next person, Ruby, who excitedly talks to him for a good fifteen minutes about his studies. Smith moves on to Robert, who speaks with him for about ten minutes about the historical impacts of the find. Lastly Smith talks to John about his research, and John jokes about how every time he has lost a game of cards it’s because of “haunters.” Smith is politely amused. Smith also makes his rounds to non player characters. During each conversation with the four characters, Smith offers them a job helping with some research; each accepts, and he tells them to meet him at his country home in the morning.

The next morning John, Ruby, Wilhelm, and Robert wake and start reading the news papers, “The Times,” London’s main newspaper, and “The Scoop,” London’s celebrity gossip newspaper. In the Times there is a story with the headline “Man Dies Three Times in One Night.” The story goes on, talking about how a man named Mehmet Makryat was found dead, with three different bodies all bearing positive identification as the same man. This of course intrigues all of them; however the intrigue does not last long, as they look at the next paper to see a horrifying story. “Professor’s Home Burns” is the headline in The Scoop. As they read the story they learn that Dr. Smith’s house burned down the night before, and Smith and is missing along with his man servant Beddows who the players meet the night before at the lecture and had seemed like a pleasant fellow.

Ruby and John and Wilhelm all start gathering their things, heading to the country home perhaps to find him there. John is mainly just concerned for the man whom he met the night before and leisurely gathers his stuff to head to the country house as well. Before they leave their homes they notice a card that had been slipped under their door at some point. The note reads “Come at once. I haven’t long. For God’s sake let no one follow you. J.A. Smith.” On the front of the card is an address in Cheapside, a place of London that Smith would not frequent. The four of them knock on the door, and Beddows lets them in. All the shades are drawn and on the bed in the room is a badly burned Dr. Smith.

He weakly tells John, Robert, Wilhelm, and Ruby to approach. Wilhelm, Ruby, and Robert, used to seeing disfigured bodies are not affected by the sight. John is not used to seeing such sights however; he is uneasy but keeps his wits about him. Smith starts to talk about an occult artifact that he was looking for named the Sedefkar Simulacrum that is a source of great evil power and that they must find it and destroy it. He says that he was attacked by Turkish madmen whom he believes are also searching for it. He goes on to explain that the statue has been separated into five pieces.

The statue’s original owner was Comite Fenalik, who lost it just prior to the French Revolution, and says some parts might still be there. Smith continues saying that Napoleon’s soldiers carried a piece into Venice. Another fragment was carried to Trieste at the same time, but he does not know where it is, and to contact  Johann Winckelmann at the museum there. Smith says that he thinks there is a piece in Serbia and to look at the museum there. One piece was last seen near Sofia during the Bulgarian war of 1875 and at the time things of value were hidden, so it may be buried. He concludes his list with the final piece being in circulation in Paris but was sold to a man in Milan; he does not know who. He finishes talking to John, Ruby, Robert, and Wilhelm with the words “I am sorry, my friends. For you, for me, for us all. Please do this for me. Go. Go quickly. God help you.” His voice all but gone, he coughs and Beddows hands him a drink; he falls back onto the pillow in a deep sleep. Beddows looks somber and takes out a valise which holds 200 new Bank of England five pound notes, one thousand sterling, and hands it to them. He then tells them that Dr. Smith planned to travel using the Simpolon-Orient express and suggests they do the same, and that it leaves in a few days. The four of them bid Beddows farewell and leave.

Having some time to kill, Robert says that he is quite interested in this man that supposedly died three times and says that he is going to Scotland Yard to ask about it. He offers for the other three to join him, and they head to Scotland yard where they meet the head investigator, Inspector Fleming. They ask him some questions, but due to the nature of the crime he does not divulge more than on each corpse was a telegram with the words ‘Meet me in London urgent M.” Over the next few days they return and talk to different officers, getting new bits of information, including that each corpse was partially skinned in different places: one on the arms, one on the chest, and the last on the legs.

Curiosity finally getting the best of them, they decide to go to Mr. Makryat’s shop/home. The front door was locked and did not budge no matter how much effort Wilhelm and Ruby put forth. They walk around to the back; there they find another locked door with a window in it. Wilhelm looks around to see if he sees anyone, which he does not, and breaks the window to open the door.

The four of them venture inside and start to look around. The shop carries unremarkable Egyptian, Arabic, and Prussian brass-work, rugs, and ceramics. The second floor is a living space with very little in it. Under a counter Robert finds Mr. Makryat’s accounting books. Reading through them, he learns that most of Makryat’s goods were imported from Turkey or the Middle East or bought from auctions in London; however an incongruous consignment note is in there, one Wrightson special-commission train set, purchased from the estate of Randolph Alexis some months before. The last sale for the shop was the same train set sold to a Mr. Henry Stanley, sold and delivered for one pound. However, there is no evidence that any train sets or toys ever being sold in his shop. Recalling Mr. Alexis, Robert tells the other three that he was an occultist of notoriety with ties to the hermetic order of the golden dawn and the hermetic order of the silver twilight. He shared this interest with his son, Albert Alexis, who dabbled in the dark arts. After discovering all they can, the four of them leave and return home to pack for their journey. 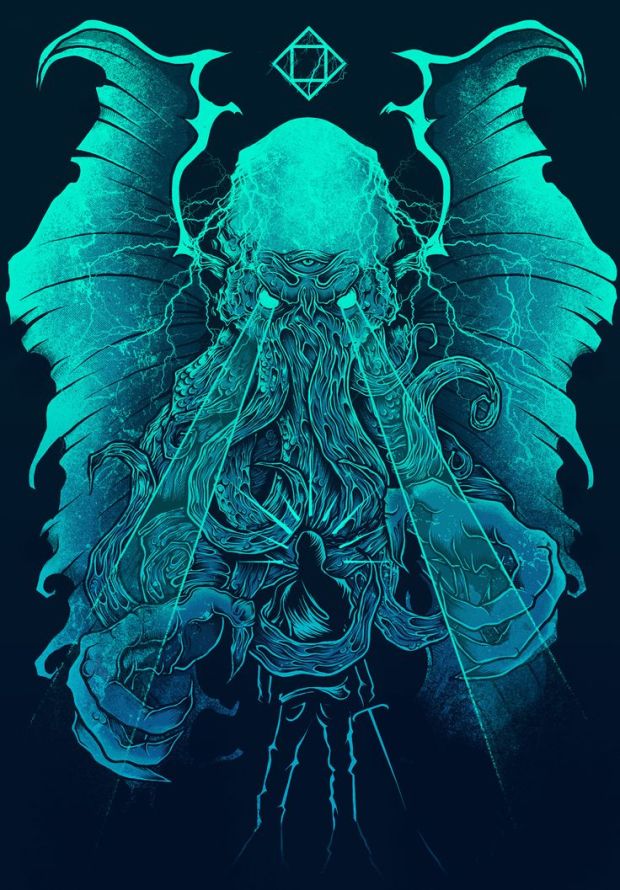 That’s all for this week folks! I hope you enjoyed the story. As this is the first week it is more of a set up and thus not very scary or interesting, but it gets better from here. I will be back with the next part: ” The Doom Train.” May our Dark Lord tickle the back of your mind! All hail Cthulhu!!!