In my life, I have seen three people lose their heads in the guillotine, and all three of those people have been Alice Cooper. He brought his macabre carnival of chaos through Texas this last week, and I was lucky enough to see Coop for the third time. Labeled as the ‘Original Shock-Rocker’, Cooper, who is 69 years old, proved in Houston that he still has the energy and means to put on a killer show (pun totally intended).

The show opened with the unusual and eclectic (yet ridiculously talented) Edgar Winter Group, and closed with classic rock legends Deep Purple. The show stealer though was definitely Alice Cooper and his band of misfits. One of these misfits, with perhaps a stage presence almost equal to Cooper, is his lead guitarist Nita Strauss. She gained fame as a lead guitarist in the all female Iron Maiden cover bad aptly named The Iron Maidens, and has been Coopers lead axe-slinger since 2014. She lead the three guitarist assault through over 40 years of Cooper classics like: ‘No More Mr. Nice Guy’, ‘Billion Dollar Babies’, ‘Poison’, ‘Brutal Planet’, and ‘Feed My Frankenstein’ (which included a giant Alice Cooper-esque Frankenstein monster chasing the band around the stage). 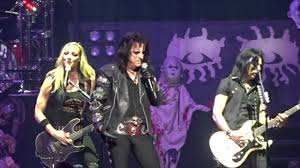 With such an array of talented musicians to entertain the crowd, Cooper frequently left the stage periodically to emerge in a new outfit. It seemed as if Strauss, the only female in the group, was also the only one who did not change clothes throughout the set. Mid-set everyone but the femme-fatale left the stage sending her into a several minute, face melting, guitar solo that is right on par with any Van Halen or Iron Maiden one I’ve ever seen.

The regular set ended with the pinnacle of any Alice Cooper show. The Guillotine. During the song, ‘I Love the Dead’ the giant preferred execution method of the French Revolution was rolled out in all it’s glory. Cooper’s head was place in the neck lock and promptly removed by the oversized, weighted, blade of death. Crowd erupted, band led us all in the simplified chorus of ‘I Love the Dead’, and Alice Cooper reminded us all that he truly is the original shock-rocker.

Shortly after the crowd singalong, Cooper miraculously re-emerges (holding his own severed head) and goes into ‘I’m Eighteen’. That closed out the regular set, but the encore almost immediately kicked-off with ‘School’s Out’. It seemed like an especially ironic closer because of all the people starting school this last week, but Cooper shows us that no matter what time of year it is, you can’t beat the classics. A nice, surprising touch during the encore was when the band went from ‘School’s Out’ right into Pink Floyd’s ‘Another Brick in the Wall, Pt. 2’. Another singalong to end the set.

Alice Cooper proved once again this weekend that, even in the 100+ degree heat that is August in Texas, he is one of the best showmen to ever step on stage. He has a great team of musicians backing him up and as long as he is performing, I’ll keep seeing him. The show was as family friendly as a haunted house (I had my 3 minions with me), and as entertaining as any other live performance a rock-n-roller or horror nut could want.