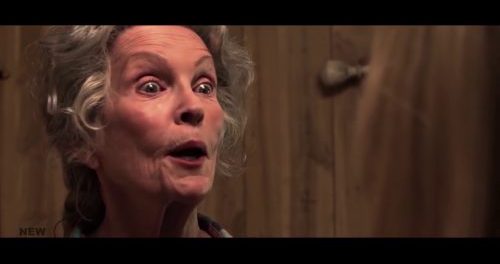 In writer and director Brad Douglas’ Besetment, the Oregon Hotel sits among the towering redwoods and bucolic hills of Mitchell, Oregon. With its flashing neon sign and comforting interior, the hotel is the kind of place that weary travelers crave after a long night of roaming empty highways and eating at roadside greasy spoons. While horror fans will be familiar with a setting of this type (think Psycho, Motel Hell, Vacancy, or Identity) Douglas and Barbed Wire Films have more than a few surprises up their collective sleeve. For while the Oregon Hotel certainly lives up to the creepy reputation of other cinematic hotels and motels of its ilk, it’s the owners of the place–Mildred Colvin (Marlyn Mason) and her dimwitted son Billy (Michael Meyer)–who intend to turn their seemingly innocuous haven into a truly demented house of horrors.

The plot of Besetment focuses on the likable Amanda Millard (Abby Wathen), a young woman looking for an escape from a dead-end life. Her mother (Lindsae Klein) is an alcoholic who verbally mocks Amanda every chance she gets–if only Amanda could secure a decent job, she might be able to get out from under her mother’s clutches and start a new life for herself. As viewers might expect, that job comes in the form of an assistant position at the Oregon Hotel. The doting, good-natured Mildred seems more than happy to welcome Amanda as her new employee, but when the elderly woman introduces Amanda to Billy, audiences quickly learn that something sinister and even quite depraved is afoot. With an appropriate synth-driven soundtrack, a few doses of morbid humor, and a stellar performance from Mason, Besetment will please indie horror fans who are looking for a disturbing little tale of kidnapping, assault, and bloodshed.

As mentioned, Mason is the standout here; her portrayal of Mildred is at once soothing and graceful, deranged and evil. Even audiences familiar with “Mrs. Bates” or “Mother” from 1980’s Mother’s Day will be shocked by the matron’s dastardly behavior. Even more interesting is that Mason imbues Mildred with a subtle sexuality that adds dimension to her character and lends an additional disturbing layer to the picture. What horror fans might appreciate most about Besetment is that, despite the low-budget and lean script, the film takes risks. The final scenes are wacky and bloody, and there’s even a clever epilogue of sorts that this writer found to be one of the most compelling aspects to the entire story. Other highlights of the film include a cool opening credits sequence and a handful of gruesome killings that utilize the smaller budget in an impressive way.

Chuck Greenwood’s cinematography handles the indie flick with confidence; while there aren’t many memorable angles or particular shots, each scene moves at a fast clip and the few jolts of action or horror come through nicely. The script is taut (the film is about 80 minutes long) and sharp, without any extraneous lines, unnecessary profanity, or general silliness. For a film about such perversion, genre audiences should appreciate the straightforward approach to the story. For an indie picture from a team of committed and talented professionals, Besetment works on multiple levels–and with the Halloween season just around the corner, it’s the perfect watch for a fun and spooky Saturday night.

Besetment is distributed by UnCork’d Entertainment and is available on VOD and DVD.