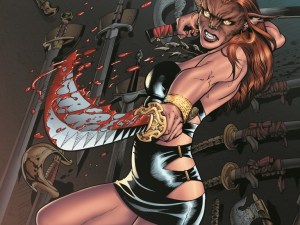 Micky Neilson and Jason Johnson keep the horror escalating for the second issue of The Howling: Revenge of the Werewolf Queen. If you read my recently posted review (right Read more [...]

Space Goat Publishing has the rights to publish stories in some of my absolute favorite horror universes, and that will always earn massive points from me, as I’m as Read more [...]

The Fright Night book just continues getting stranger with each issue. Truth be told, I really don’t remember the stories being quite so outlandish. I suppose a few decades Read more [...]

A quick note: No part of this book whatsoever is featured in the films, but since I started this column, I’m going to stick with it until I’ve wrapped the final issue. Read more [...]

The second issue of Fright Night allows the original film’s story to be resolved. And it – just like the previous issue – is surprisingly faithful to the film. Ed is Read more [...]