This Tuesday offers up a few serious gems. Fans of vintage cult fare are going to be pleased, television fanatics are about to be dealt a fine dose of content and those who’ve been eagerly anticipating the arrival of Wolf Creek 2 are going to have a reason to smile a nice, big, shit-eating grin. Check out the disc releases on deck for June 24th, 2014!

The Addicted (Revolver Entertainment): 25 years after a patient in a drug rehab clinic commits suicide, 4 friends decide to spend a night in the abandoned clinic to try and film some of the reported paranormal goings-on. Shortly thereafter, an up and coming TV journalist is persuaded to spend a night in the clinic with 3 of her friends to try and film some of the spooky activity that is rumored to be going on. In the course of one night, Nicole, her boyfriend and their two friends discover the sickening truth about the history of the clinic and have to face a very real possibility that they might never leave.

Helix: Season 1 (Sony) – DVD and blu-ray: Helix is an intense thriller about a team of scientists from the Centers for Disease Control who travels to a high-tech research facility in the Arctic to investigate a possible disease outbreak, only to find themselves pulled into a terrifying life-and-death struggle that holds the key to mankind.

Jungle (Entertainment One): An exploration deep into the Indonesian rainforest to find and tag the elusive Javan Leopard leads conservationist Larry Black (Rupert Reid) and his team on a path of terror. When their expedition uncovers evidence of a horrifying new species, it becomes apparent that the legendary forest demon feared by the natives is more than just a myth.

The Ouija Experiment (Phase 4 Films): Michael gathers four of his friends together to contact the spirits of the dead using a Ouija board. Thinking it will be a fun evening, one of them records the experience on camera against the wishes of Michael, who is fearful of upsetting the dead. Michaels fears are soon realized when the group forgets the three cardinal rules of using the Ouija board and upset the spirit of a little girl, opening up a doorway to the spirit world and unleashing an unspeakable terror upon themselves. 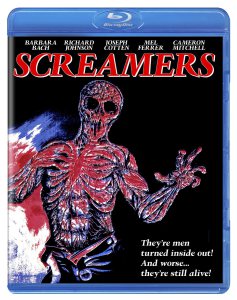 Screamers (Scorpion/ADA Corp) – DVD and blu-ray: From legendary producer Roger Corman comes the horror classic! It’s 1891: Lieutenant Claude de Ross (Claudio Cassinelli), a military doctor, and a few newly escaped convicts are shipwrecked on a mysterious tropical island. They soon come across a strange couple: the sadistic Edmund Rackham (Richard Johnson) and the beautiful Amanda Marvin (Barbara Bach). The doctor finds out that Amanda’s father, professor Ernest Marvin (Joseph Cotten), is a mad scientist who is experimenting on horrible human-fish mutations. While Professor Marvin is convinced that he’s doing his research for humanitarian motives, Rackham has other plans, since he has discovered an incredible secret lying beneath the island. Now watch this cult classic from a brand new HD Master, from the original inrerpositive!

Witches of East End: Complete First Season (20th Century Fox): The season is based loosely on the book of the same by Melissa de la Cruz. The story takes place in East End focusing on a family of witches, lead by Joanna Beauchamp (Julia Ormond).

Wolf Creek 2 (Image) – DVD and blu-ray: Lured by the promise of an Australian holiday, exchange student Paul visits the notorious Wolf Creek Crater. His dream Outback adventure soon becomes a horrific reality when he encounters the site’s most infamous local, Mick Taylor (John Jarratt). When Paul attempts to flee, Mick pursues him across a hostile wasteland and eventually drags him back to his underground lair. After seeing the true magnitude of Mick’s monstrosity, Paul’s only hope of surviving, where no one has before, will be to use every ounce of cunning to outwit the man behind the monster.