What strikes me as interesting about The Conjuring 2 is the fact that James Wan has managed to tell a near-identical story to the one seen just a few years back. Make no mistake, The Conjuring 2 certainly focuses on a different paranormal experience to that featured in the first film, but Wan also applies a few of the same visual tricks we’ve seen from him in the past (beyond the Conjuring franchise exclusively). Yet somehow, they feel neither stale nor recycled. He makes his technical maneuvers work perfectly, apparently, no matter how many times we see them.

The Conjuring 2 blends elements of the Amityville situation with the Enfield situation and although the Enfield case absorbs the bulk of attention, the Amityville case doesn’t go completely neglected (it’s actually tied to a great moment early in the film in which we see Ed really begin to lose his cool while making a television appearance). Blending the two tales together is an excellent maneuver, as it offers us an idea of how hectic and terrifying the lives of the Warren couple truly was.

I don’t aim to get into too many details about the Enfield case. But, we’ve got a single, struggling mother working to look after a handful of children while keeping her sanity intact and her family’s health at an optimal, and you know all of that’s going to Hell in a handbasket once the family begins experiencing some chilling occurrences in their home. Can Ed and Lorraine Warren help to save this family, or are they as doomed as the Amityville case’s Lutz family?

James Wan really knows what he’s doing. The man, dating back to his first major feature length film, Saw, has exhibited an understanding of the dreadful. He’s able to juggle looming chills (a lot of his effectiveness is knowing how to man the camera) with jarring jump scares and he creates a perfect balance, leaving us constantly wondering whether we’re about to field a scare that sends us flying from our seats, or a scare that clings to our psyche once we’ve departed the theater. That’s a stunning and erratic quality.

Wilson and Farmiga run the show here, and the time that’s lapsed between the first Conjuring pic and the second has left the two looking far more seasoned and prepared for the abnormalities that they encounter creeping from their world into ours. They just handle themselves as seasoned investigators would, as opposed to constantly learning on the job.

I’m holding everything that I can back, because this is an excellent sequel that sends a constant shiver down the spine, and if I start dropping details and time stamps, I’ll essentially steal something valuable from viewers. One could easily argue this piece as superior to the first film. While I’ll need another viewing before I feel comfortable making that kind of assessment, I don’t need to see the film again to tell you it’s certainly an effective freak-out session that’s going to have you leaving lights on before bed.

The Conjuring 2 is awesome, and you’ll be doing yourself a favor by taking a trip to the local theater to catch it on the big screen! 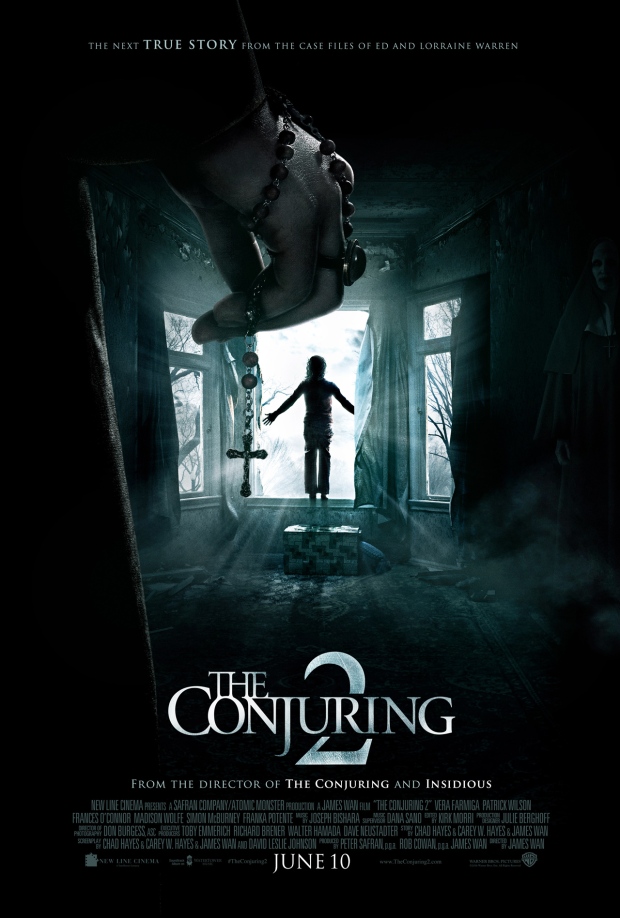