You want to talk interesting films? Hidden in the Woods is an interesting film. It’s interesting in the sense that it feels like a fun homage to blatant exploitation films, yet at times, it doesn’t necessarily feel as though that’s the actual design of the story, which makes the whole interesting perspective a little… odd. Is that a product of the transfer from original Chilean tale to American genre piece? I’m not entirely certain. To be quite frank, it’s hard to pin point the intentions of director Patricio Valladares, and that makes this one a fence film. You’re probably either going to love it, or hate it.

The story is really a rather hopeless one, as we follow two sisters who essentially endure hell, on repeat, from moment one up until the film’s eventual final act. Their father is an abusive, drug dealing drunkard who murders his cheating wife in the opening moments of the pic. We then move forward in time and learn that he’s also made it a habit of raping both of his daughters, one of which is impregnated with the vile bastard’s child… and grandchild. Eventually the law catches up to this fellow, and he finds himself imprisoned. The girls, now grown women, are left to fend for themselves, but that isn’t as easy as it sounds, as they’ve lived a reclusive life and find difficulty in fitting into society. They’ve also got a savage “uncle” who happens to be the local drug kingpin. When their father heads to prison, he does so having left behind a stash of the man’s drugs. So, naturally, the boss man would like to find his drugs that remain hidden, but since tracking the dope down isn’t so easy with his dealer “brother” (there’s a little bit of ambiguity in regards to the genuine relationship between these men, hence the quotation marks) behind bars, he sets his sights on the two young women, who, at this point, are just looking to escape the area and find some sense of normalcy for the first time in their lives.

The greatest problem that struck me as something of an amateur exhibit were some holes in the story (I don’t want to explore these too thoroughly, as, if you can miss them, you’ll be better off), and that kind of problem actually feels like a compounded issue considering this is a remake of a preexisting film. You’d think a second run at the same tale would produce answers to a few of the existing (if these problems did indeed exist in the original pic) questions, but there are holes here, and they make for a sometimes-tough-to-enjoy picture. The scope here is relatively small, and we’re focused on just a handful of characters and a relatively controlled conflict in a relatively limited location. It shouldn’t be a tale that is impossible to tell with fluidity, yet that’s how it comes across on a handful of occasions. Honestly, that’s all I care to issue disappointment with. I think the film as a whole is enjoyable if you accept it for what it is, especially if you’ve had your heart invested in the genre for a lengthy period of time.

The great Michael Biehn does an awesome job doing something we don’t see every day: being a bad guy. He’s a savage dude in Hidden in the Woods, merciless and without remorse, and seeing Biehn in such a role is mighty engaging. He’s the proverbial car crash you can’t help but slow down and gawk at. And then you’ve got fellow genre contributor, William Forsythe, and he too portrays the villainous type. Unlike Biehn, Forsythe has tackled these kinds of roles on a number of occasions. He’s tested and true and this film is no exception. Relative unknown, Jeannine Kaspar gets big praise for tackling a trying role as the desperate older sister determined to get her younger sibling out of the fire; Kaspar performs beyond her years and credits suggest possible. It was cool seeing retired mixed martial artist, Krzysztof Soszynski make an appearance as a rugged but silent bodyguard, as well. MMA is my only passion beyond film and music, and I followed Soszynski’s (a damn fine competitor with a wicked Kimura, for the record) career since his lone Strikeforce appearance some 10 years ago – I love to see fighters, or former fighters, venture into other professional realms and find success. “The Polish Experiment” deserves work of this nature… well, a few extra lines wouldn’t hurt.

If I’m going to make any complaints regarding the cast, it’s that Jennifer Blanc-Biehn is sorely underutilized. She’s an attractive and charismatic performer that turns in consistently memorable performances, and she just doesn’t have much screen time here. Frankly, that sucks, but, that, like most of the smaller hiccups of the picture, is overlookable.

The movie has the gritty, grimy, ugly feel of a ‘70s exploitation film, and personally, I get a big kick out of that. There’s a certain charm to these pics, pics that look like they were shot on 35mm, time, sweat and frustration later invested in the grueling editing process. These movies really hit a special place in my heart, as I often find more beauty in the encrusted realism presented by low budget genre features than flashy Hollywood productions. I would have loved to have experienced a tighter script, but I got just enough of the good stuff to negate my displeasure with screenplay details. All in all, Hidden in the Woods isn’t a perfect film, by any stretch, but it’s awesome for fans of throwback drive-thru pieces, and director Patricio Valladares shows some very serious promise. Where he goes from here could prove extremely interesting. 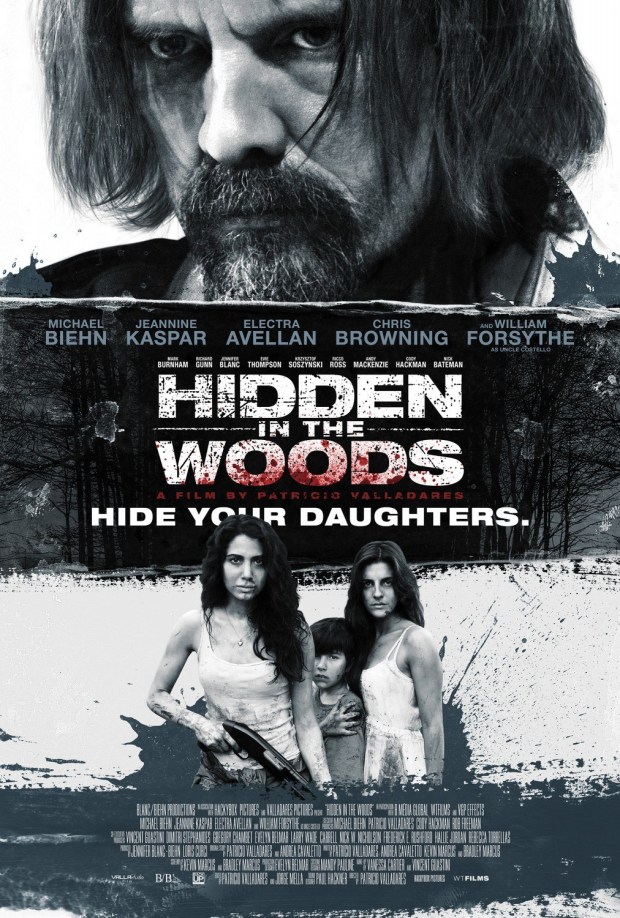