Every now and then some old random story of solid interest will pop to the surface of my melon and I’ll embark on a journey to refresh my memory. Today the random memory was triggered by a simple response I read on a popular forum. The response was “boo hoo,” and the memory that was triggered centered on the man who made Leatherface famous, the late Gunnar Hansen, and the man who made the hulking villain memorable to millennials, Andrew Bryniarski, who donned the face mask in the 2003 Texas Chainsaw Massacre remake as well as the prequel, The Texas Chainsaw Massacre: The Beginning.

We all remember that Hansen passed back in 2015 after a bout with pancreatic cancer. It was rough news to absorb, and it had a serious effect on lifelong genre fanatics.

The effect it had on Bryniarski however, wasn’t of the touching sort. Andrew’s response to Hansen’s passing elicited a short but savage “boo hoo.”

The quote, which made its way into our lives via the wondrous invention we know as social media, set fans on edge and garnered quite a bit of heat, all aimed in Bryniarski’s direction. He would eventually explain his heartless post. 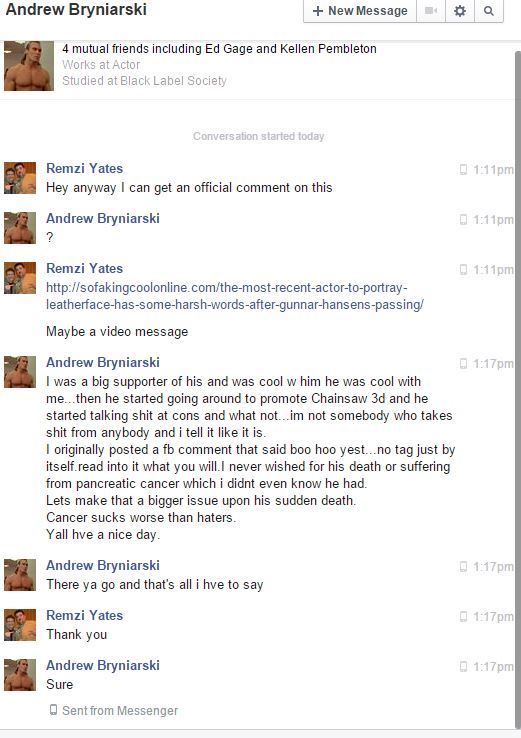 That worked to clear up some of the original post’s hostility, but it didn’t succeed in doing much else, other than painting Bryniarski as quite the immature fellow.

When one Leatherface disses another, after he’s died, well… that’s a weird situation all around. Defecating on a recently passed cinematic icon isn’t the greatest look, for anyone.